Château Ducru-Beaucaillou’s vineyards are near the Gironde estuary, where the softer and lighter Saint-Julien wines come from (as contrasted to the richer wines from inland vineyards like Gruaud-Larose).

(I grew up near Pebble Mill Studios in Birmingham, which were definitely not beautiful… 🙁)

It takes the other half of its name from the Ducru family that owned the estate from 1797 to 1866.

The winemaking and storage at Ducru-Beaucaillou is underground (and nearly 300 years old), which is atypical for Bordeaux, and allows the wine to age in steadier and cooler conditions than most other (overground) Bordeaux estates.

The wine itself is usually as balanced and symmetrical as the 1820 château depicted on the striking yellow and gold label.

Arden’s bottle of 1955 Château Ducru-Beaucaillou came from a private cellar in Warwickshire.

It’s a well-regarded vintage of Ducru-Beaucaillou, the best between 1953 and 1959, a period in which Bordeaux endured a run of dire vintages (especially the frost-bitten 1956).

A fine vintage wine to get “stoned” with… 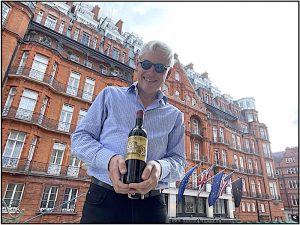