When 1962 Château Lafite Rothschild was released in 1965, it retailed at about £2 per bottle, which would now equate to about £40. Happy days… 😊

As juveniles, the 1962 wines were well-ordered and congenial (apparently – I’m too young to know first-hand). They were plentiful and reasonably-priced (as per 1955).

This largely forgotten Bordeaux vintage has always been upstaged by the bravado of 1961, which was a small crop and ambitiously-priced.

It was a late late vintage in 1962. Ripening was delayed (because the sap in the vines kept drying out), so the harvest didn’t start until 10th October; in 1961 it began on 27th September.

“It’s like those sticks of rock: bite it all the way down, you’ll still read Brighton”, as Ida says in Graham Greene’s 1938 novel Brighton Rock.

Lafite – like many other late-harvested 1962s – has a streak of acidity that runs through the wine like “Brighton Rock” in a stick of boiled sugar.

Arden’s bottle of Lafite ’62 came from a private client in the East Midlands, who retained it from their late parent’s cellar. 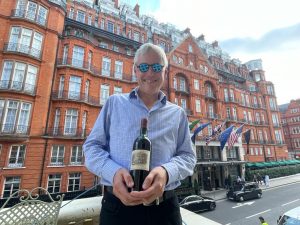