In 1928, at the height of the Jazz Age, the River Thames flooded central London; Amelia Earhart became the first woman to make a successful transatlantic flight; Herbert Hoover became President of the USA; Mickey Mouse made his first sound film appearance in Steamboat Willie; and two notorious novels – Radclyffe Hall’s The Well of Loneliness and D. H. Lawrence’s Lady Chatterley’s Lover – were published. (I read them as a curious teenager 😉).

In Bordeaux wine country, the sun shone and the grapes grew thick skins, so that the resulting wines had tannins as dense as plutonium.

Like the wines of the 1870 and 1900 vintages, they seemed to have been built by the same firm that did Stonehenge (to paraphrase John Le Carré).

Those heroic tannins might sustain some 1928s for years to come.

This very rare half-bottle of 1928 Château Margaux came to Arden from an auctioneer in my (sort of) hometown Stratford-upon-Avon, consigned from a local cellar.

The provenance is assured: “’Tis no counterfeit”, as my Warwickshire kinsman William Shakespeare put it. 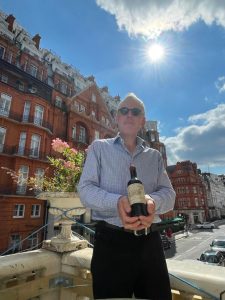