Famously (for Honours graduates of English Literature like me, anyway), 1922 is the year zero of 20th century literature – the year that saw the publication of T.S. Eliot’s “The Waste Land” and James Joyce’s Ulysses.

It was also a fine Port vintage that was declared by most shippers. The 1922 Port wines were soigné, similar to those produced in 1917.

This impenetrably dark (and impossibly rare) bottle of 1922 Fonseca Vintage Port was mouth-blown and hand-made (rather than machine-made). 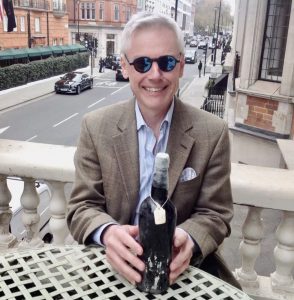 The neck (which had been wrapped to protect it in transit) has “stretch marks” – twists caused by the irregularity of mouth-blown glass. The bottle’s surface is gnarled rather than smooth.

The punt (indented base) of the bottle has a conspicuous pontil “scar”, where the pontil rod was broken from the newly-blown glass.

How did I know that – with no label and the cork not visible – it’s 1922? Because there was a slip label – placed there by a previous owner – inside the punt 😉.

It also worth noting that 1922 is referred to (on page 104) as a Declared Vintage by Fonseca in Wyndham Fletcher’s 1978 book Port: An Introduction to its History and Delights.

This near-centenarian came to Arden Fine Wines via one of our longstanding trade suppliers, who had purchased the bottle some time ago from another trade supplier, who had acquired it from a former employee of Percy Fox.

It was made at a time when there was great demand for Port. Indeed, the release of Fonseca’s 1920 Vintage in 1922 was oversubscribed and many customers were unable to secure allocations. Demand was eased only slightly by the enactment of Prohibition in the United States in January 1920.

That it had survived unopened for so many years is remarkable.

When opened it will “mix memory and desire” (to slightly misquote T.S. Eliot) and should be drunk from a “glass / Held up by standards wrought with fruited vines”.