An Italian friend likes to remind me that England has won the FIFA World Cup only once, 55 years’ ago in 1966, and at home – as opposed to Italy’s four wins, three of which were overseas, and most recently in 2006… ☹️

In the year that England won the World Cup, it was an up and down viticultural year in Champagne.

There was a vine-killing frost in the New Year of 1966; hailstorms during the summer months; and problems with mildew during a wet August.

But the weather improved in September and October and some very nice wines were made (though probably not quite as good as 1964). 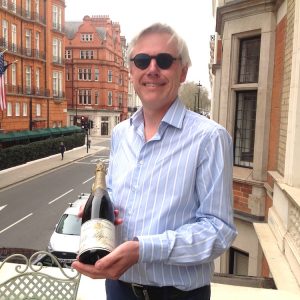 This beautiful bottle of 1966 Pol Roger came from a private cellar in South East England. It’s been well-looked after during its 55-year lifespan.

The mottled label indicates cool, damp storage. The ullage level is very good for its age.

(How do I tell how much wine is in the bottle when the capsule covers the neck? Turn the bottle upside down… 😁)

All in all, it’s in as good a condition as could be expected of a 55-year old bottle of fine wine.

It comes from a time when Pol Roger used concrete vats to make and age its wines.

Nowadays it’s all steel tanks, so in 1966 Pol Roger had a different, more oxidative style (because concrete is porous) to the reductive, anaerobic (with little or no exposure to air) Pol that we all know and love.

In the meantime, look after yourselves and mind how you go.