Despite his unappetising habits, Lecter appreciates the good things in life – especially food and wine.

As he tells Clarice Starling in Hannibal: “dinner appeals to the taste and smell, the oldest senses and the closest to the centre of the mind”.

Probably Lecter’s most famous saying – from the 1991 film The Silence of the Lambs – is: “A census taker once tried to test me. I ate his liver with some fava beans and a nice Chianti.”

In the 1988 novel (upon which the film was based), the wine to go with census taker’s liver is “a big Amarone”.

(For Italian reds, we recommend ORMÆVINÆ Pontassieve PRIMÆ from our friends Alexey and Ella in Chianti Rufina – but please not with human liver.) 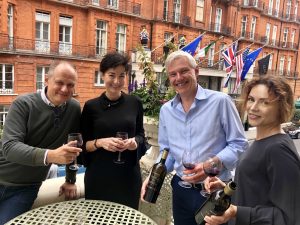 In Hannibal – the 2001 film sequel to Silence of the Lambs – Lecter matches a Trimbach Clos Sainte Hune Riesling with a sautéed chunk of brain. Yum…

Chapter 62 of Thomas Harris’s 1999 novel Hannibal (the source for the film) describes Lecter “Late in the night, his lips stained by the red Château (sic) Petrus, a small glass of honey-coloured Château d’Yquem on his candle stand…”.

The film version’s final scene shows Lecter on a plane, drinking 1996 Château Phélan Ségur, with a goodies box that seemingly contains a sautéed piece of somebody’s brain. Again, this is not a wine and food pairing that we can recommend.

Stay safe and well (and warm).