From my friend Vic Mills:

First up, apologies for the generic nature of this mail. This is not our style, but these are unprecedented times. Evidenced by the fact that ordinarily I would be mailing you our Winter Newsletter. Well, winter we certainly have but, as you might expect, nationwide lockdowns both in Germany and the UK have seriously depleted news content. Until, that is, a week last Monday.

Last summer we committed ourselves to providing clothing and kit for children of the Shatila refugee camp in southern Beirut. After the autumn collections, kit was set aside, packed and readied for shipment, only to be put on indefinite hold. A week last Monday I received an email from Richard Verity, founder of the Beirut cricket project. He was in London, set to fly to Lebanon the following lunchtime, and could he come and collect the kit? I immediately contacted PFF trustee, Tim Gill, at our Berkshire basecamp. He spoke with Richard and they agreed a handover at Junction 5 on the M4 that night around 7 o’clock. Kit collection, check-in and flight went to plan and just thirty hours after the initial email arrived in Berlin the four bags of project kit were handed to our new friends in Beirut. The backstory to this is that the Terminal 2 check-in of four large cricket bags created interest among at least one of the Middle East Airlines (MEA) ground staff (pictured below). On discovering they contained cricket kit bound for children in Beirut he immediately waived the excess baggage costs.

While project news is understandably thin on the ground right now, these thirty hours in the life and times of Project Front Foot rank as some of the most special. In performing yet another logistical miracle, huge thanks go to Tim and Richard. Thanks, too, to our kindly yet anonymous MEA official at Heathrow. And finally, sincere thanks to Project Front Foot supporters whether individuals, clubs or cricket boards’ for their generous kit donations last summer. We hope to return to our usual newsletter format with the Spring edition. In the meantime, please click on the attachments below for images of the Berkshire to Beirut journey.

With all good wishes 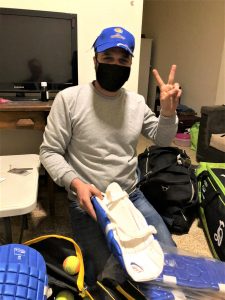 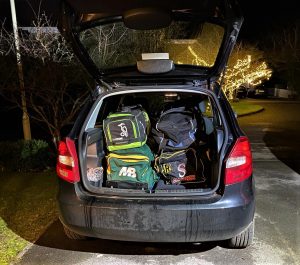 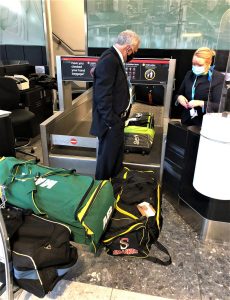