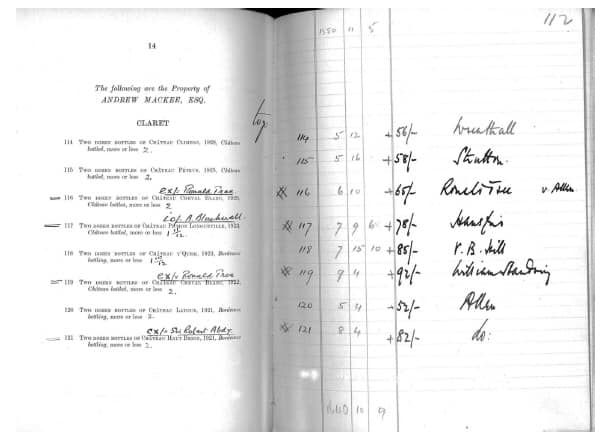 On Thursday 9th December 1935 Michael Broadbent MW was eight years old, having enjoyed his birthday on 2nd May. (He’s Taurean, like me.)

On that Thursday, Christie’s held a wine auction. The then eight-year old Michael would become head of Christie’s Wine Department 33 years later.

The image here is from the annotated catalogue of that wine auction and shows eight lots from “the property of Andrew Mackee, Esq.” (who he?)

The left page is from the original pre-sale catalogue and contains some handwritten notes by the auctioneer on the number of bottles in each lot (a vague “two dozen bottles… more or less” was listed); on commission bids submitted prior to the sale; and the name of the buyer.

The right page was added by the auctioneer and shows the price paid for each lot (in pounds, shillings, and pence) and the equivalent price (in shillings) per dozen bottles.

Climens 1928 was a fine example of this excellent Sauternes vintage. As the youngest wine here – only a year younger than the boy Broadbent – it was probably a sweetly fruity treat at that time.

It is extraordinary to see it auctioned here at only two shillings – 10 pence! – less than “Château (sic) Pétrus 1925”, though this was an unloved Bordeaux vintage and in the era when Pétrus – having won a gold medal at the Paris Exposition Universelle of 1878 – was well-regarded but priced at the level of a Médoc Second Growth and nowhere near the vaunted levels it would achieve in the second half of the 20th century.

It’s unclear which of Château Pichon Baron or Château Pichon Lalande the “Pichon Longueville 1923” is. It’s now unthinkable that either Pichon would sell for 35% more than Pétrus.

Cheval Blanc of the cold and wet 1922 vintage is the most expensive wine here at 92 shillings per bottle. The purchaser of this and the Cheval ’25 is noted as “Ronald Tree”. This was probably the then Conservative MP for Harborough in Leicestershire and owner (from 1933) of Ditchley Park in Oxfordshire. Because Ditchley had heavy foliage and no visible access road, during the War Churchill asked Tree for “accommodation at Ditchley for certain weekends, when the moon is high”.

The Haut-Brion 1921 was sold to “Sir Robert Adby”, who was the 5th Baronet and whose vast fortune derived from the family’s ownership of large parts of London’s docklands. Born in 1896, he lived a long life, married three times, and passed away in 1976 (as did Ronald Tree, who was a year younger). The former Adby seat at Albyns Hall near Chigwell is currently for sale at £3 million.

Adby’s social circle included Lord Berners, who was once the owner of the bottle of Château Mouton Rothschild 1945 that we acquired in 2018 http://vinsextraordinaires.com/retail-sales.html.