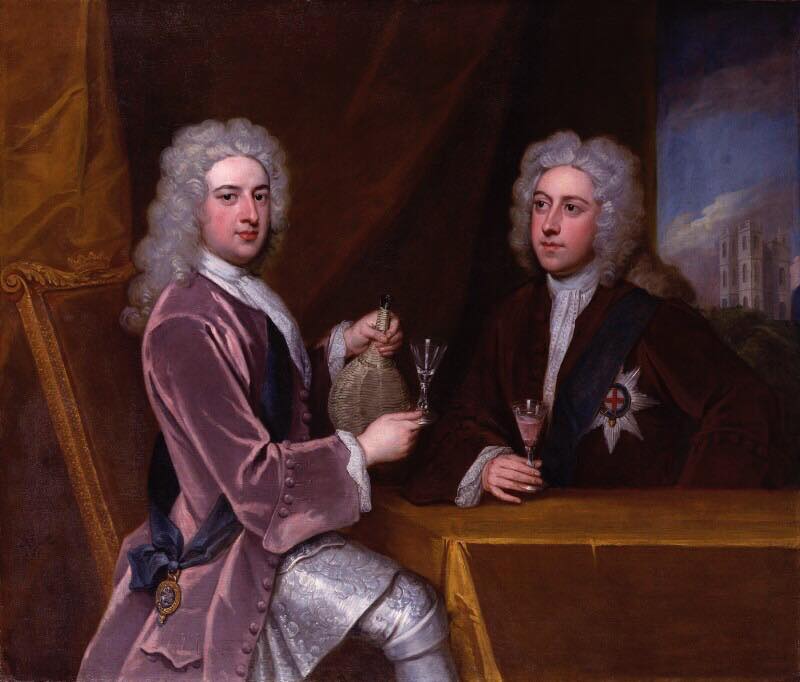 The Duke looks at the viewer as he is about to pour himself a glass of wine from a bottle inside a wicker flask. His brother-in-law the Earl’s glass has already been filled with red wine. In this reproduction the wine is violet-tinted, like the Duke’s jacket, but has probably faded over time from its original ruddiness.

Both men were members of the Kit-Cat Club (for Whig politicians, not chocoholics) and the glasses that they hold in this portrait are thought to be those specially made for the club’s meetings. Toasts were drunk to the honour of a beautiful woman – including all the daughters of John Churchill, 1st Duke of Marlborough, as well as various Duchesses – and those toasted had their names engraved on a glass goblet.

The darkly curtained background has a small glimpse of an exterior view that shows Belvedere Tower at Claremont House in Surrey.

The historian Harry Dickinson said of Newcastle that he was “Notorious for his fussiness and fretfulness, his petty jealousies, his reluctance to accept responsibility for his actions, and his inability to pursue any political objective to his own satisfaction or to the nation’s profit… Many modern historians have depicted him as the epitome of unredeemed mediocrity and as a veritable buffoon in office.”

Remind you of anybody…?