This Peter Dominic wine list from October 1973 might bring tears to the eyes of people of a certain age – and not just because of the (to modern eyes) exceptionally inexpensive prices. It is a tale of the wine trade over th 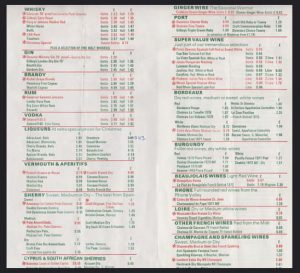 Over Christmas I found a copy of “Everybody’s Wine Guide” by Anthony Hogg, a director of Peter Dominic from 1959 to 1974 and a contemporary of David Peppercorn MW (former Peter Dominic wine buyer) and my former colleague Anthony Hanson MW, both of whom are name-checked in this 1986 book.

Peter Dominic was the brand name of Paul Dauthieu, a Scotsman of French heritage. Starting with a shop in Horsham in December 1939, the business grew to 10 branches in southern market towns by 1956. I believe that Paul Dauthieu’s descendants now own Ehrmanns.

In 1963 Peter Dominic was sold for £750k to International Distillers & Vintners, which at

that time comprised Gilbeys, Justerini & Brooks, and the Hennessey agents Twiss & Brownings & Hallowes. By 1968, all of International Distillers & Vintners’ 354 off-licences were branded as Peter Dominic – “the best name we’ve got”, said the IDV Chairman.

Watney’s had a 25% stake in IDV and took complete control in 1972. Within a few months both companies found themselves part of Grand Metropolitan, which in 1997 merged with Guinness to form Diageo – now a 37% stakeholder in Moët Hennessy.

When Thresher took over Peter Dominic from Grand Metropolitan for £50m in 1991 the shops were rebranded under the Thresher name.

The Bottoms Up brand of shops, formerly owned by Peter Dominic, was retained. Peter Dominic was separated from Grand Met’s IDV group in 1989 to become a retail division.

Thresher was purchased by the Japanese private equity firm Nomura Holdings in October 2000 for £225m.

Terra Firma Capital Partners purchased it in April 2002 and allegedly sold it to Pension Insurance Corporation at a significant loss in June 2007.

Only two weeks after the purchase from Terra Firma Capital Partners the company was sold by Pension Insurance Corporation to Vision Capital. It was renamed as First Quench Retailing in 2008.

In October 2009 it was announced that First Quench Retailing had entered into administration, crushed by competition from supermarkets.

And that was that – a sad end to a once great wine company that started with a single shop in a Sussex town in 1939.

17 Responses to The rise and fall of Peter Dominic: The story of a wine business