“I’ll have a very large glass of red wine, please…” A nice image that I found in the catalogue for the March 2017 auction of “Two Great Scottish Collections: Property from the Forbeses of Pitsligo and the Marquesses of Lothian”. 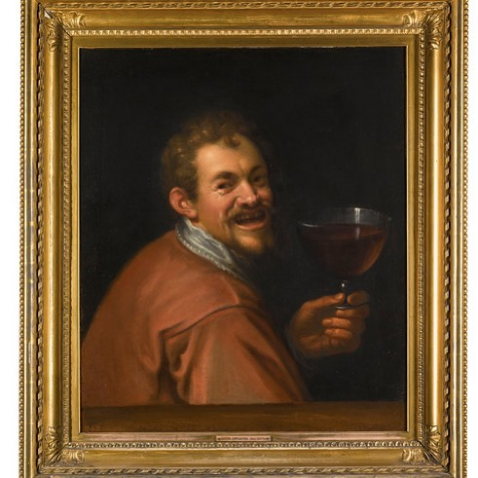 The catalogue was in The Running Horse pub in Davies Street, where I happened to be one evening. Not that I go in pubs very often, of course…

“The Merry Toper” is attributed to a “Follower of Hans von Aachen”. A letter from the 3rd Earl of Lothian (1605-75) to his agent, John Clerk, dated 30th June 1649, lists a large number of desired items, including “the picture of Hans von Acle.”

It is unclear whether Lothian ever managed to acquire this painting; in a letter from September 1649 he wrote, “divers things I miss… I did assuredly expect Hans van Akle and I did not thinke you would have stood wt me for sutch a matter.”

The painting is possibly mentioned in the 1788 Newbattle Abbey inventory as “A man with a glass in his hand”.