A boozy meeting depicted by James Gillray in his 1795 hand-coloured etching “God save the King,-in a bumper.or-an evening scene, three times a week at Wimbleton.” 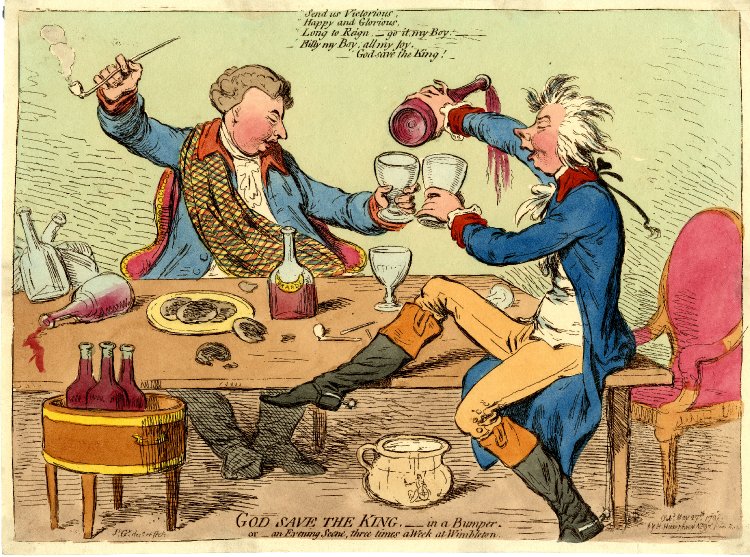 Prime Minister William Pitt the Younger and his Secretary of State for War Henry Dundas, 1st Viscount Melville, are carousing at a rectangular table from which the cloth has been removed. Pitt, wearing spurred top-boots, sits on the corner of the table in profile to the left, his chair behind him at the head of the table. Dundas (left), wearing a plaid across his shoulders, sits full-face, turning his head in profile to the right, and waving a tobacco-pipe towards Pitt. They touch glasses, each holding his glass in the left hand; Pitt tries to fill them (with claret, perhaps), but with the bottle reversed so spilling its contents. On the table is a decanter of “Brandy”, a bottle on its side, a clutter of empty bottles, glasses, Pitt’s broken pipe, and a plate of food. In the foreground are bottles in a wine-cooler, and under the table is a chamber-pot on which is a figure of Britannia.

In 1806, Melville became the last person to be impeached in the United Kingdom, for misappropriation of public money. Although acquitted, he never held public office again.