In the aftermath of Sotheby’s recent ex-cellars sale of Mouton Rothschild wines in Hong Kong, it’s an opportune moment to republish an article that I did originally for Artists & Illustrators magazine, which in those days was a sister publication to The World of Fine Wine.

What wine is best drunk with Bacon? Château Mouton-Rothschild has a long history of commissioning artists to design its label for each new vintage. By Stuart George

In addition to being one of the world’s greatest wines, and one of only five Bordeaux “Premier Crus” (“First Growths”), Château Mouton Rothschild has a long history of commissioning artists to design its label for each new vintage.

To commemorate the first bottling of the wine at the château itself, Baron Philippe de Rothschild commissioned Jean Carlu to design a label for the 1924 vintage. The “ram” image that he created was a visual pun on “Mouton”, which is an old French word for “hill” but also the word for “sheep.” This began the tradition of incorporating a ram into the label design. The vine and the pleasures of drinking are also recurring themes.

The 1945 “victory” year was the first Mouton since 1924 to feature a bespoke label. In a great Bordeaux vintage, Mouton was particularly brilliant and is now acclaimed as one of the greatest wines of all time. Former Christie’s wine auctioneer Michael Broadbent MW (Master of Wine) describes Mouton ’45 as, “A Churchill of a wine”, and not just in reference to the wine itself, either. The young and unknown artist Philippe Jullian based his label design on Churchill’s “V for Victory.”

Not all the labels have been completely bespoke, though. Picasso’s Bacchanale for the 1973 wine (which was made after Picasso’s death and subsequently dedicated to him) and Kandinsky’s label in 1971 were reproductions of existing works of art. Nor does the label necessarily convey any message about the vintage that it illustrates.

Designing for Mouton is a difficult challenge for an artist. There is very little space to work with – just the top half of the Mouton label, or about 8cm x 4cm – so the works are not always typical. The only instruction to artists is, “make it horizontal.” Emilia Kabakov, wife and spokesperson of the 2002 label’s artist Ilya Kabakov, says, “The Mouton label was probably the smallest piece he’s ever worked on. It was very different from anything he’s done before. The requirements were very specific.”

The Polish-German artist Balthus’ drawing of a naked girl for the 1993 label caused a minor scandal in the US, where the draconian Bureau of Alcohol, Tobacco and Firearms (in America, these things are inextricably linked) censured the label and prohibited the sale of the wine. Mouton was forced to sell its wine in the US with a neutral label that showed only the ochre background.

For the 2000 vintage, Mouton was dressed as lamb. In place of a paper label, the image of the 16th century “ram of Augsburg” from the Mouton museum was transferred to the bottle using a specially developed relief enamel technique. 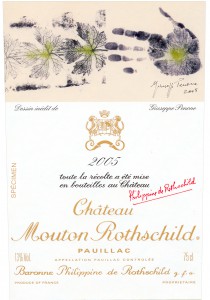 The Prince of Wales’ 2004 watercolour contribution commemorated the centenary of the Entente Cordiale – the part-secret agreement between France and Britain that was signed in London on 8 April 1904 – and shows a French landscape.

The 2005 wine, to be released to the market in Spring 2007, shows a work by the Italian sculptor Giuseppe Penone. His design for Mouton includes a handprint, and evokes the vine-grower’s “green-fingers” and the splayed hand of the drinker.

With such an international mix of artists, a display of Mouton labels would make a fine modern art gallery. In February 2007, there was a three-week exhibition in New York of the original artworks that have been reproduced on the Mouton-Rothschild label. To complement the exhibition (and vice versa), Baroness Philippine de Rothschild, who has been the owner of Mouton-Rothschild since the death of her father in 1988, offered wines from her personal collection for sale on February 28. Among the highlights was a 1945 Jéroboam (equivalent in size to six standard bottles), only 24 of which were produced. It was knocked down for $260,000.

Although these price spikes were probably caused by a pleasant luncheon with a famous owner, Mouton was the most-traded fine wine of 2007. On average, Mouton increased 50 percent in price during the year, outperforming the wine market as a whole. Mouton used to command a premium because of its bespoke labels, which were collected avidly, but nowadays the château has to justify its price solely by what is inside the bottle and not what is on the label.

Although the artists are never paid for their work, they do receive ten cases of wine – five of that year’s vintage, plus five of their own vintage year. (The lucky ones have been born in 1945, 1959, 1961…). Which brings a whole new dimension to “drinking away one’s earnings.”

One Response to Mouton Dressed As Lamb: The Wine Labels of Château Mouton Rothschild