In June 2010, while in Hong Kong on business, I was invited to visit a private cellar in the mountainous and densely populated New Territories region.

The cellar was, on the face of it, astonishing, filled with every great vintage of every desirable wine. The owner claimed to have the world’s largest collection of Pétrus, for example. An entire wall of wine racks was filled with Pétrus vintages back to the early 20th century. Without having been able to look very closely, I suspect that a lot of these amazing bottles were a fake or forgery. 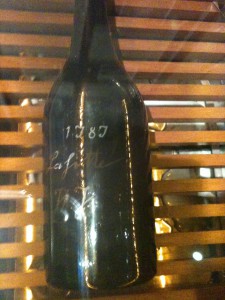 In the entrance to the apartment block, pride of place was given to a glass case containing the oldest, and probably most notorious, bottle in this apparently fabulous collection – a 1787 Lafite, engraved with the initials “Th.J”.

How this bottle ended up in the lobby of a Hong Kong apartment block is a tale of money, hubris and damaged reputations.

This blog post is an amended version of an article first published by Fine Wine International.

Thomas Jefferson (1743-1826), third President of the United States (1801-1809) and the principal author of the 1776 Declaration of Independence, lived in Paris from 1784 to 1789 as Minister to France. Jefferson was an enthusiastic drinker and bought large quantities of wines from France’s classic regions, particularly Bordeaux.

In 1985, a German wine collector called Hardy Rodenstock – a.k.a Meinhard Görke, a manager and publisher of Schlager music – claimed to have discovered a cellar in Paris that contained several old bottles, including 1784 and 1787 Lafite, some of which were engraved with the initials “Th.J”.

Having been authenticated by Michael Broadbent MW, about the most experienced and honest man in the wine trade (and a hugely enjoyable companion at lunch or dinner to boot), the engraved 1787 Lafite was sold at a London auction on 5 December 1985 for £105,000, a record price for a single bottle of wine that still stands. Other bottles of Jefferson Lafite were subsequently sold, including the one that now resides in Hong Kong.

Rodenstock’s reputation as the source of extraordinary wines became unassailable. His tastings were extraordinary, such as the weeklong, 125-vintage vertical of Château d’Yquem at Munich’s Hotel Königshof in September 1998.

Despite repeated requests from Broadbent, Rodenstock never provided anything but vague stories about cellars in Paris and Venezuela. He would not even disclose how many bottles he had found.

Broadbent contacted Cinder Goodwin, who had spent 15 years editing Jefferson’s Memorandum Books. She could not find any record of wines of the 1787 vintage in Jefferson’s meticulous records. Goodwin also noted that Jefferson initialled his correspondence as “Th:J”, with a colon, whereas the bottles were engraved as “Th.J”. Nonetheless, the sale went ahead.

Other details subsequently emerged. Rodenstock was apparently known among Bordeaux antiques dealers for buying old, empty bottles. It would have taken an eighteenth century engraver about three hours to write “Lafite 1787 Th.J” on a glass bottle – and Jefferson owned hundreds of bottles.

The surge in demand for fine wine, particularly in Asia, has motivated fraudsters. To all those fake shoes, clothes and bags can now be added wine.

Like expensive watches, fine wines are relatively inexpensive to make. Their value comes largely from their status as a Veblen good, coveted for their high price. The gulf between production costs and retail costs and between supply and demand can be exploited.

It is relatively easy to fake wine. All one needs are a bottle, a label and some wine, all of which can be readily and inexpensively obtained. Fakes vary in their ingenuity. Some are very crude – with photocopied labels, for example – but others are much more sophisticated.

The traditional, and still most reliable, way of judging if a wine is fake or not is to taste it. But very few people have the experience and ability to declare that a bottle of, say, Pétrus 1921 is the real thing. Even then, bottles vary tremendously according to storage conditions. And by opening a bottle the evidence is destroyed.

There is no way to date old wine scientifically. An old bottle cannot be x-rayed like an old painting. Some of Rodenstock’s bottles have been subjected to radioisotope analysis, which measures radiation levels. These tests showed that the wine is definitely older than the atomic bomb explosions of the 1940s. But that certainly does not prove that it was made in 1787.

The American collector Russel Frye has established Wine Authentication Services (“The war on counterfeiting starts here”). Frye lists ten wines as those “heard or read about most often or found to be most publicized”: Cheval Blanc 1921 and 1947; Lafite 1787 Thomas Jefferson (single bottle format) and Lafite 1870; Lafleur 1947 and 1950; Latour à Pomerol 1961; Margaux 1900; and Pétrus 1921 and 1947.

In 2006, Frye sued a California wine merchant for selling him counterfeit wines that were allegedly from Rodenstock. The case was settled out of court in February 2008.

Broadbent successfully sued Random House, the UK publisher of The Billionaire’s Vinegar, in October 2009. As Broadbent’s solicitor put it, “The book made allegations which suggested that Mr Broadbent had behaved in an unprofessional manner in the way in which he had auctioned some of these bottles and that his relationship and dealings with Hardy Rodenstock, who discovered the original collection, was suspected of being improper.” The book is no longer available in the UK.

It is nearly 30 years since Rodenstock bestrode the fine wine world like a colossus but the litigation goes on. Probably we will never know the truth about that bottle of Lafite 1787 – but my close encounter with that bottle, and my photograph of it, suggest that it’s not quite what it claims to be.