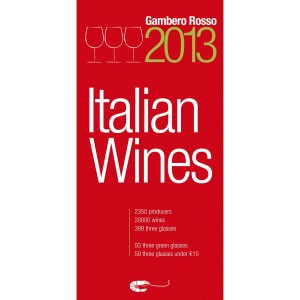 In its January 2013 issue Gambero Rosso magazine published an article by Michel Bettane that was highly critical of “natural” wine. The issue also included an op-ed by Eleonora Guerini—senior editor of the guide—that was equally contemptuous. In response to this, the Italian-language wine blog Intravino published an “open letter” signed by several “natural” winemakers, some of whom do not feature in the guide. Does this mean that Gambero Rosso is anti-natural? Well, no, because there are plenty of natural wine producers included in its annual guide. Valter Mattoni, for example, co-signed the open letter but here he is, listed as producing 5,500 bottles from 3 hectares—hardly a wine that is likely to be easy to obtain. But the guide suggests, “they are well worth seeking out”.

If Eleonora Guerini really did have an axe to grind with “natural” wine then possibly it would be trashed in the preface or excluded completely from the book. But this is what it says in the 2013 guide: “(Wines are described) without prejudice or preference for fermentation in new wood, stainless steel or even earthenware amphorae”. That “even” before “earthenware amphorae” is telling but nonetheless “natural” wine is given space and respect.

Michel Bettane made up his mind about “natural” wine a long time ago. I have worked with Michel and he is not the type to change his kind (he’s French). But I don’t believe that Gambero Rosso has an agenda against “natural” wines. It takes the view that some are crap and some are good—which is my own view, and true of all wine. So it goes.

As for the guide itself, it is now in its 26th edition and is italianissima. The only non-Italians involved in this huge annual project are the translators. But are Italians the best judges of their own wines? One does wonder sometimes. When I worked the 2001 vintage in Friuli I recall a lunch with several well-travelled and broadminded winemakers. Bottles were opened enthusiastically, including at least one that was “tre bicchieri” (three glasses), the Gambero Rosso equivalent of 100 points. We all agreed that the wine was filthy. Unfortunately I have no recollection of what the wine was.

The stats are fascinating. 45,000 samples were assessed by 60 experts, which equates to 750 wines per expert, or two wines per day for a year. Not very hard work, really. The all-time Gambero Rosso champion is Angelo Gaja, with 50 “tre bicchieri” awards since the guide was established. This is 13 more than Cà del Bosco and La Spinetta in joint second place.

There is a broadly sympathetic theme of “environmentally aware producers”, with “Viticulture Method” noted in many but not all winery profiles. Wineries are either “Certified Organic” or “Natural”. (Presumably wineries with no method listed are uncertified or unnatural.) It doesn’t work: It needs to be comprehensive or not used at all, and it can be ambiguous. For example, the Friulian producer Skerk is listed as “Certified Organic”, which he surely is, but he is also a well-known proponent of “natural” wine (yes, that again), which is another category. “Unnatural deeds / Do breed unnatural troubles” as somebody once said.

The text has been impeccably, if rather stiffly, translated. There are very few typos or solecisms for such a huge book.

With 959 pages of text this is very comprehensive. It’s hard to think of a significant producer that is not profiled here. At €30 it’s pricey but Gambero Rosso remains unchallenged as the definitive annual guide to Italian wines. Can the newly single and single-minded Antonio Galloni challenge it? As the Italian proverb says, “Dio mi guardi da chi studia un libro solo” (“Fear the man of one book”).