Always seeking opportunities to enjoy self-indulgence while it masquerades as something more worthy, I was delighted to receive an invitation from the Italian Trade Commission to attend “a press-conference and lunch on the theme ‘Sport and the Mediterranean Diet – how to be a winner eating healthy food’ at Casa Batavia in Kensington (well, Notting Hill Gate really). Who wouldn’t want to eat their way to success?

I take food seriously. First and foremost, it is a health consideration – lightly cooked fresh ingredients are better for you (and me) than highly processed stuff in plastic packaging. Second, and this is probably not a consideration of athletes, it is an aesthetic indulgence – I like the smell and taste of good food and wine. It gives me pleasure. 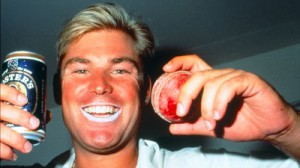 It is obvious that diet has an effect on an athlete’s ability to perform at their optimal level. Think of John Daly and Shane Warne (and too many English footballers to list) and all those hamburgers and cokes and beers. These two sportsmen didn’t have bad careers – indeed, Warne could not have had a better career – but other, less gifted athletes might have achieved much more if they’d eaten better and been fitter.

But sometimes it can go too far. Hollie Avil, who represented Team GB in the triathlon at the Beijing Olympics, retired because of anorexia. A coach told Jessica Ennis, who is “fit” in every sense, that she was overweight. Photos of her ironing board stomach soon disprove that notion.

As Marco Cardinale, Head of Sports Science and Research of the British Olympic Association, pointed out, the link between diet and performance was recognised long ago. In Gymnasticus, the Greek scholar Philostratus queried the “tetrad” training system’s lack of attention to diet: “While the (coaches) are following this fixed routine of the tetrad, they pay no attention to the condition of the athlete they are training, even though he is being harmed by his food, his wine, the secret snacks he eats, mental strain and fatigue… How can we train by a schedule of tetrads?”

Even in Ancient Greece, then, Scooby Snacks were frowned upon.

Epictetus, another Greek thinker, declared, “You would fain be victor at the Olympic Games, you say. Yes, but weigh the conditions, weigh the consequences; then and then only, lay to your hand – if it be for your profit. You must live by rule, submit to diet, abstain from dainty meats, exercise your body perforce at stated hours, in heat or in cold; drink no cold water, nor, it may be, wine. In a word, you must surrender yourself wholly to your trainer, as though to a physician.”

Two thousand years later, that is how the modern athlete trains. 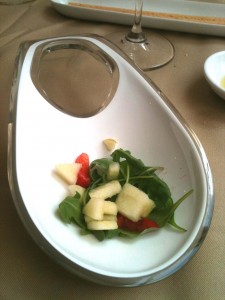 Signor Cardinale made some other fascinating points. At the 1960 Rome Olympics food was available to competitors for 24 hours – no diets or pushy coaches then. The London Olympic restaurant for athletes and officials is as big as Heathrow’s T5 – it has to provide food for hundreds of people all day, every day. And the caterers will have to deal with the challenge of Ramadan (19 July-18 August), which falls right into the Olympic period.

British athletes are not fussy eaters, said Signor Cardinale, but are prone to fad diets and a reliance on supplements. Italians, however, don’t go overseas without a packet of pasta in their suitcase. 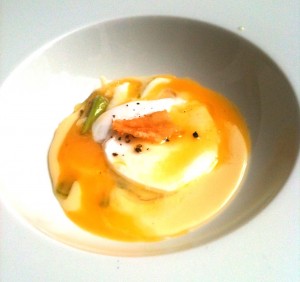 Not being a particularly frequent visitor to London W8 I had not been to Casa Batavia before. Its owner, the Italian Michelin-starred chef Nicola Batavia, made his name at Ristorante Birichin in Turin. He also owns La Kava at Bergeggi, on the Ligurian coast to the south of Turin. This vaguely Olympic-themed event was held at Casa Batavia because (I guess) of the owner’s links to Nike: he is chef for the “Nike VIP House” where Nike-sponsored athletes are paraded. It means a lot to him: “it’s more than a Michelin star!” he exclaimed. (The Nike wine sponsor, incidentally, is Banfi.) 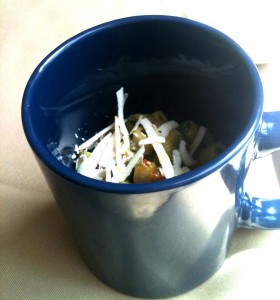 Chef Batavia told us he had been studying healthy eating: “A diet doesn’t mean not eating! Good athletes eat a lot… They’re fast cars that need a lot of petrol.” Having expected something very meager, our super-healthy lunch today was actually thoroughly enjoyable and filling.

A melon juice very heavily seasoned with pepper – too much for me – was the aperitif. A very simple salad of rocket, strawberry and (I think) melon again was fine. But I wouldn’t pay £5, or whatever it costs, for this.

An egg dish used a lot of cheese to the point of decadence. It was absolutely delicious. A mug (yes, really) of pasta made from spelt flour and covered with (I think) celery, mustard seed and pesto was blander than it sounds. It was tasty but again I suspect that it would be too costly to justify ordering. 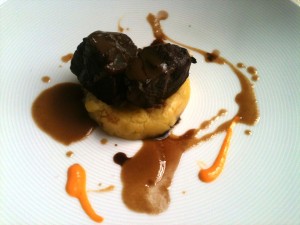 Our dose of protein was beef cheek, which, as quite a fatty cut of meat, is not obviously healthy. But chef Batavia did a wonderful job with this. It melted in the mouth and was so good with a bed of seasoned mash potato.

I wasn’t expecting dessert – not good for athletes – but a tiny chocolate dish came out and very yummy it was too. 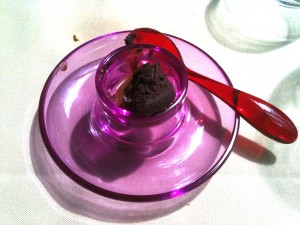 Of course wine is good for you, so we drank Beni di Batasiolo’s Barbera d’Alba Sovrana 2009. I still have nightmares about some of the wines I encountered at the Barbera Meeting 2010 but this wasn’t bad – juicy and mercifully not swamped by wood. With aeration it became a bit greener and leaner.

Silver medals go to Nicola Batavia for his fine food and to the Italian Trade Commission for a well-organised event.