The first thing you notice – as a wine writer, anyway – as you walk into the Grand Imperial is the enormous glass wine cabinet filled with bling stuff like Cristal and Dom Pérignon. Perhaps as a token gesture to the Diamond Jubilee celebrations the Balfour Brut Rosé – made in Kent – was lying next to the Cristal. 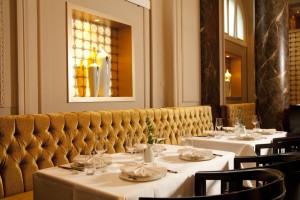 Situated inside The Grosvenor Hotel – one of London’s grand Victorian railway hotels –the Grand Imperial was opened in January 2012. It is part of the Malaysian-owned Guoman Group of hotels. Restaurant Manager Lee Keong, who previously worked at Hakkasan, China Tang and other swanky Chinese places in London, hosted me.

Currently all the wines, as I could tell, are supplied by Bibendum. Lee knows and enjoys wine but he intends to appoint a fulltime sommelier in due course. When looking to match wine to food Lee considers the basic ingredients of a dish first – meat, fish or vegetable – and then thinks about the sauce. As he pointed out, a dm sum menu has many different flavours and textures that make wine-matching a real challenge. He likes Riesling and Grüner Veltliner. “Riesling is a very versatile wine and goes with a lot of Chinese cooking”, he said.

Although quiet when I visited on Bank Holiday Tuesday evening the restaurant, with 120 covers, is almost fully booked for the Olympic period. Thirty percent of all visitors to the restaurant are Chinese-Asian, Lee told me, and they tend to be high rollers who will order those bottles of Dom Pérignon and Cristal staring at them from the glass cabinet.

Before tucking into the wine list we had Taiwan Oolong Cha Wang (Si Ji Xiang) tea, which was aromatic and mellow. It is, said Lee, a light tea with low caffeine.

The house white wine is Valdivieso Sauvignon Blanc 2011 from (I think) Aconcagua. Clean, aromatic, fresh and crisp – all good clean fun and very reasonable at £5.50 per 175ml glass. Stellenrust Chenin Blanc (Fairtrade) 2011 brought to mind the same adjectives as the Valdivieso.

Wither Hills Pinot Gris Marlborough 2010 was plump and dry. Apparently a small parcel is fermented in used French oak barrels but I didn’t taste any wood influence. It was a very good example of Kiwi Pinot Gris.

With the Steamed Prawn Dumpling with XO Chilli Sauce Domaine Jean Defaix’s Chablis 2010 was ideal. A good “classic” Chablis, it was clean, with crisp, green apple fruit and no oak makeup.

I first tasted Charles Smith’s wines in September 2010 prior to their formal UK release. I had the 2009 Kung Fu Girl Riesling Columbia Valley then, which, I noted, had a mineral nose and generous palate, crisply dry with lemon sherbet flavours on the finish. It had only 1.3 g/ltr sugar but the generous fruit made it feel sweeter. The 2010 listed at the Grand Imperial is lemony and brisk. Not surprisingly it’s popular with younger Chinese diners.

The white wines by the glass are unoaked except for Domaine La Croix Belle Chardonnay Côtes du Thongue 2011, which has a lick of oak – and, alas, some acetate.

I found the Castillo di Clavijo Rioja Crianza 2008 too wood-dry – an excess of French oak, perhaps? Also from Spain the Bodegas Tábula Damana 5 Ribera del Duero 2009 was very pungent and potent, with slack acidity. Although supple-textured it wasn’t really for me.

I loved the sweet and juicy d’Arenberg The Stump Jump Shiraz 2010. It was great with the Sautéed Beef Cube with Assorted Mushroom in Black Pepper Sauce. 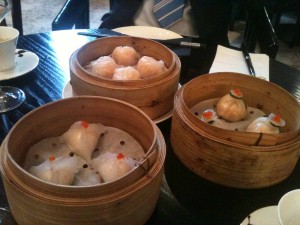 The pastry of the Home-Made Rice Roll with Barbecued Honey Glazed Pork was lovely. A vegetarian dish of cooked radish at first glance looked like duck but Lee assured me that there was no meat here. It was piquant and yummy. 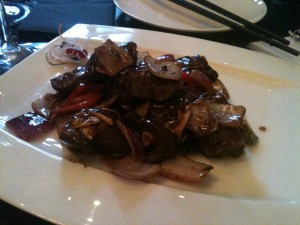 The Sautéed Beef Cube is a signature dish here and was superb. Made from tenderloin, it melted in the mouth. Roasted Peking Duck Served with Pancakes was tasty but the Deep Fried Shredded Duck Meat Wrapped in Bean Curd Roll and Spicy Minced Duck with Lettuce Wrap were much more interesting.