Many years ago I spent six months in Friuli working as a cellar rat in a winery near Gorizia. It was a seminal experience. I learned a bit about winemaking but a good deal more about how to eat. Ever since then I’ve always been hungry and I’ve always loved Friulano cuisine.

In Covent Garden on Tuesday it was the warmest evening since – well, since March. The bizarre weather in London this year took a turn for the better with temperatures in the high 20s. It was a perfect evening in which to enjoy San Daniele ham and Friulano wines. In conjunction with Gabrielle Shaw, the Consorzio del Prosciutto di San Daniele has created a pop-up osteria in Covent Garden to serve ham and wine.

The Prosciutto di San Daniele was lip-smackingly good, the finest I’ve had in London. It’s a wonderful “natural” food – nothing but pork and sea salt in combination with San Daniele’s mesoclimate. Disappointingly the cheese was Parmesan rather than Montasio, and not very good Parmesan at that. The stuff I import from Ol Formager in Bergamo is the best! 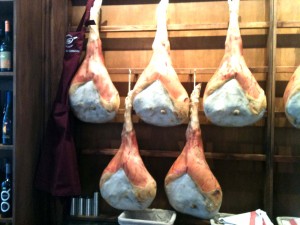 Six wines were shown. During a recent trip to Colli Orientali del Friuli I tasted Azienda Agricola La Sclusa’s Picolit 2008 – a sugary masterpiece as smooth as a river stone – but not its Friulano 2011, which was creamy and bitter-edged.

Le Due Sauvignon Torri Vigneto Le Coccie Friuli Grave 2010 was perfect with a canapé of San Daniele ham on top of peppers, red onion and zucchini in a cheese pastry shell (I think that’s what it was anyway). The capsicum flavours of the wine rhymed with those of the canapé and its brackish notes rhymed with the ham. 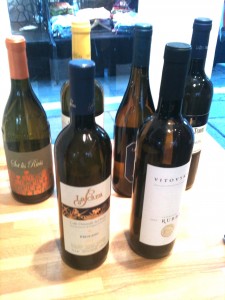 Tenuta Villanova Uve Nostre Ribolla Gialla Collio 2010 was a bit rustic but had character. Ronco del Gelso Rive Alte Pinot Grigio Sot Lis Rivis Isonzo del Friuli 2011 was not to my taste. It wasn’t overoaked but the wood covered the clean apple fruit like a lid and made the flavours very unappetising.

Castello di Rubbia’s Vitovska IGT Venezia Giulia 2009 is from the Carso, the rugged and windswept landscape that overlooks the Gulf of Trieste and goes into Slovenia. Although I have spent intermittent time in the Carso I cannot recall tasting the Vitovska grape before. It was bitter and vaguely tannic though it improved with aeration to become very pleasant.

As far as I know not a “natural wine” per se but certainly showing signs of skin contact and lengthy barrel ageing, Dragus’s Miklus Collio Malvasia 2009 was bright gold, oxidative and had overripe apple flavours. Its texture was tinder-dry because of too much time in botti. And it had an extraordinary 15% alcohol, which indicates very late picking. It was esoteric to be sure but so flat and lifeless that there was no great pleasure in drinking it on a warm evening.

A typically mixed bunch, then, but anything that encourages people to try Friulano food and wine is fine by me.