Yesterday was a tough start to the week. I had an hour at Lord’s in the morning before a lunchtime meeting at Il Convivio. The match was over by the time lunch was done so I couldn’t go back to Lord’s. Told you it was tough. 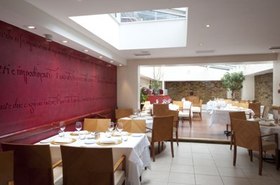 I was hosted by Marco Magaraggia and Giulia Ferrari of Tenuta Nuova Cà da Meo di Magda Pedrini in Piemonte – Gavi, to be precise, though several non-Gavi red wines are made, including Barbera, Barolo and Brachetto.

The wine estate was established only five or six years ago. I understand that the Pedrini family made its money in Nigeria and – most unusually for a new winery – has its largest client base in West Africa. Only 10-15% of total production is sold domestically; the rest is exported. Currently at 70,000, Pedrini is building towards 100,000 bottles per year.

A tank sample of 2011 Gavi was Cortese as nature intended: clean, brisk and fresh, with the electric acidity that is so characteristic of this grape.

Gavi La Piacentina 2010 underwent some alchemy – skin contact and lees stirring – but was otherwise made exactly the same as the basic Gavi, which is to say no oak. It had more to it, more on the nose and more stuffing, but was uncharacteristically plump for Gavi. I prefer it leaner.

The charmingly named Il Pettirosso DOC Monferrato Rosso 2010 is a Barbera-Cabernet Sauvignon blend. Some of the wine was aged in barriques but mercifully it wasn’t overoaked, though a hint of tar on the nose suggested time in wood. It was pleasantly supple but a little bit warm at 14% alcohol. Probably the rough edges will have smoothed out in six- to 12-months time. 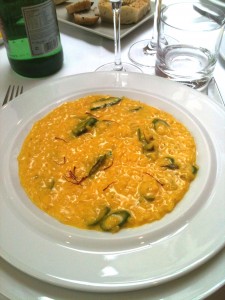 Il Convivio’s food was good. I don’t think it specialises in any particular region but it does very good “generic” Italian food. Risotto Mantecato con Mascarpone, Asparagi e Zafferano (mascarpone and saffron risotto with asparagus) was very nicely cooked but rather pricey at £12.

The main course of Coniglio Brasato con Patate, Verza e Salsa alla Senape (braised rabbit with ratte potatoes, rosemary scented cabbage and Dijon mustard) was tasty though the mustard sauce looked as though it might have been warmed up just for me – its texture was a bit cloying. Not bad for £18 though.

A decadent start to the week meant dessert was offered and accepted. Crostatina di Pere e Cocco con Crème Fraîche e Granita al Lime (poached pear and coconut tart with crème fraîche and a calvados and lime ‘granita’) was very good, as Giulia would agree! £7 for dessert is not so bad for Central London.

I should also mention that we had a bottle of Quinta Do Crasto Douro 2009 at my recommendation. There were plenty of Italian wines on the list of course but I always like to offer things that people might not be familiar with. I’ve had this wine several times and always enjoyed it – dark flavours and docile acidity.