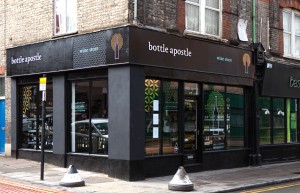 Further to my visit to Bottle Apostle in Hackney in October 2009, I was recently invited to go and have a look at their new shop in Crouch End – not an area of London that I know well at all and one that I had presumed was something of a graveyard for wine merchants.

Not so, General Manager Christopher Sherwood told me: “There’s no shortage of places to buy wines here – Oddbins and supermarkets and so on.” Unsurprisingly the rents are higher here than in Hackney. 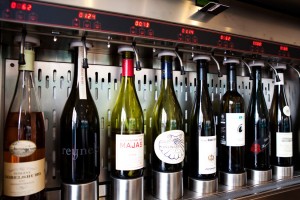 Previously a furniture store, the Crouch End Bottle Apostle was opened at the beginning of April. The list is the same as that in Hackney but there is more space and shelving available here so more or less the entire list is on display. Hackney has four of those expensive and temperamental Enomatic machines but Crouch End has two. As Christopher admitted, “They cost a lot and take up space.”

The N8 shop has plenty of room for storage and for events, though the local council (Haringey) tightly regulates these things. Like my home borough of Lambeth, it’s steeped in red. 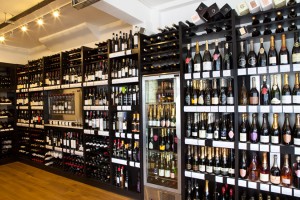 The greater part of sales by value is Italian but Bottle Apostle does not claim to specialise in any particular country or region. “We like French wine and we can’t get away from not selling it”, Christopher says. “(But) Portugal is a strength.”

Some stuff has been shipped direct from Bordeaux but otherwise wines are bought via agents, though a few bits have come through agents that are not usually shipped. It means that Bottle Apostle has “exclusivity” on some wines.

A few “natural” – or at least unsulphured – wines are offered. “We don’t sell them because they’re natural. Wines are listed on their own merits”, Christopher asserted. “‘Natural’ wines that are borderline faulty and have high acidity don’t really work – in reality they’re not very drinkable. They’re not a priority. We need to sell consistent products.”

Consistency is not something one always associates with fans of natural wine!