A couple of hours ago I popped out for lunch and was drenched by an almighty downpour. I might as well have jumped off Vauxhall Bridge into the Thames (though I’d sink straight to the bottom – I can barely swim).

The rain had been forecast for several days but, astonishingly, all but the most northerly and westerly counties of England are officially in a state of drought. According to the BBC website, the Environment Agency has warned that some areas could remain in drought until at least Christmas, which – after today’s downpour and the typical weather we usually endure every summer in England – beggars belief.

After three successive winters of brutal temperatures and snowfall, this winter just gone was extremely dry, with relatively little rainfall. 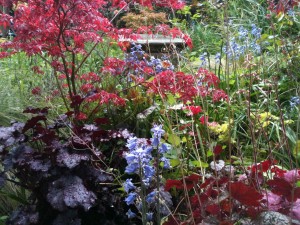 During the COF 2012 trip to Friuli two weeks ago I learned (and saw) how northeast Italy had also suffered from a lack of rainfall. In viticultural terms this means – as my colleague Jeremy Parzen wrote – “The current drought, combined with fears of an late spring frost that could stymie the vegetative cycle (with disastrous results), is causing a loss of sleep among the Friulian winery owners that we’ve spoken to so far.”

Happily for the winemakers of Friuli the dry spell finally ended on Tuesday 3rd April. At last they could sleep contentedly.

As for my herb garden (above)… Well, it looks just fine after a sprinkling of rain this afternoon.