Tea at the Ritz is as much a British institution as warm beer. But few people – and I can only speak for myself here – venture there for lunch. Why bother? In recent years it has never been particularly renowned for fine dining – no celeb chefs here, only the brilliant and unassuming John Williams. So it would likely cost a fortune to eat fairly average food at a posh West End hotel.

I was very happy, however, to have my prejudices dispelled during a lunchtime visit to the Ritz on 11th April courtesy of my friend and colleague Jane Egginton. She’s not a Time Out Person of the Year for nothing you know!

The visit started badly because nobody had warned me – and I had not thought to check – that “gentlemen are required to wear a jacket and tie.” I was able to borrow a black blazer and pink silk tie to make me acceptable in the dining room.

Once seated by the window, on the Green Park side of the hotel, we started with a glass of Ritz Champagne, made by Jacquesson. Based on 70% Pinot Noir (the rest I suppose is Chardonnay), it was brisk, bouncy and light.

The charming tailcoated waiters brought us some amuses bouches that melted in the mouth: salmon mousse on a yoghurt base, prawn cracker with hollandaise sauce, and venison tartare on flat bread. 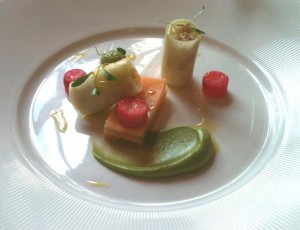 The first white wine was a Lugana. The young Italian sommelier explained that this was a dry wine from Veneto. The last time I drank Lugana it came from the shores of Lake Garda, which is in Lombardia – though some is made on the eastern (Veneto) side of the lake, too. At any rate, it was clean and fairly neutral, which is about all one can ever say about Lugana.

Jane and I were effectively guinea pigs for the evolving and not yet formalised Spring Menu. The menu for today listed “Dressed Crab Roll, Avocado and Charentais Melon” but we ended up with an exquisite crab roll dressed in finely sliced Granny Smith apple. The skill and patience needed to slice like that is unimaginable to an inept home chef like me. 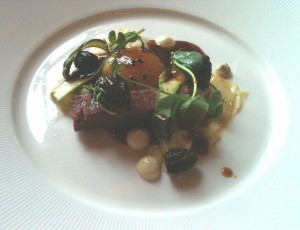 The wines kept coming. A Pascal Jolivet Sancerre was badly corked but our sommelier insisted it wasn’t – oxidised, he reckoned. Really! It was a disappointing performance in a venue like this. Surely the Ritz can train its sommeliers to spot wine tainted by TCA? At least they do learn that the customer is always right – the Sancerre was replaced with a Saint Clair Marlborough Riesling. I do not know why we were not offered a second bottle of the Sancerre then. We did taste a second bottle later and it was much better, confirming that the first was faulty.

The food, however, continued to impress. The contrasting textures and weights of the duck egg with smoked beef and smoked celeriac – the latter as a slither – was marvellous. The seasoning of morels, mayonnaise, truffle sauce and borage created a fantastic palette of flavours. This was served with Hamilton Russell Chardonnay 2010, gilded by new oak but elegant and tinged with minerality. 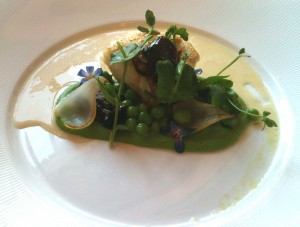 I have never eaten fish and meat in the same dish before but John Williams has matched turbot with pea purée and braised oxtail pieces with verbena sauce and herbs. It was wonderful and confirmed his virtuosity with herbs.

Our main course – the fourth course – was roasted veal cutlet, done medium rare and carved in front of us by the waiter, with (in no particular order) nasturtium leaves, Sauce Robert (brown mustard sauce), cauliflower purée (the Ritz is big on purées, which is fine by me), sweetbread, caramelised onion and seasoned mushroom. The sommelier hit gold by pairing this with a superb Avignonesi Vino Nobile di Montepulciano. It was Sangiovese in excelsis, with lusty acidity and friction-free tannins. 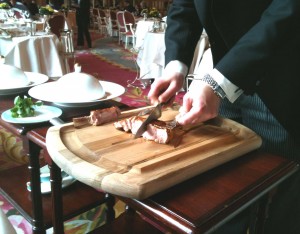 The combination of Château Villefranche 2007 with a rhubarb desert was also a winner. The wine’s easygoing style was perfect with the poached rhubarb and rhubarb sorbet with a light sprinkling of crumble. This epitomised the lunch as a whole: no excess of carbs (no mashed potato or chips); generous but not trencherman servings; and everything done with a light but highly skilful touch. Jane told me, “I honestly think it was the best meal of my life” though I was not so sure. But when she asked, “Have you ever had a better meal?” I could not think of one. 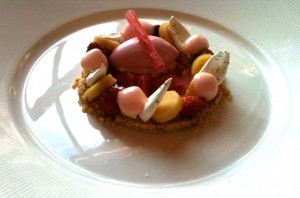 Despite the sometimes ill informed – though always courteous – service, the wines were good. I noted that our neighbours were drinking Guigal Hermitage Blanc and Bonneau du Martray Corton rouge. I shudder to think what they would cost.

The three-course menu at the Ritz is priced at £45 (including VAT and service), with five courses at £65. I would guess that those prices could be doubled when wine is factored in. That is remarkable value for such outstanding food at such a famous venue and compares very favourably with other “destination” restaurants in London.

On that note, I should declare that I did not pay for this lunch – I went with Jane as a guest of the Ritz, to whom I give thanks for this opportunity to appraise an iconic London venue.

One Response to Lunch at the Ritz