A convoluted and delayed trip from Basel to Venice to Udine was made tolerable by the splendid dinner that was laid-on for me and my fellow COF 2012 bloggers on Sunday evening. 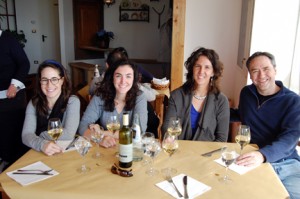 Friulano food has always been a joy to me. Ten years ago I worked as a cellar rat at Azienda Agricola Lorenzon in Pieris. Upon the arrival of the skinny Englishman nonna Maria weighed me and shook her head in disbelief. It became her personal mission to fatten me and to teach me how to eat properly. Six months later I was weighed again and had gained 5 kg. La nonna had changed my metabolism. Ever since then I’ve always been hungry.

Sunday’s dinner at Corte San Biagio of frico and polenta, asparagus soup and roast lamb with roast potatoes by Marina was a reminder of what I’ve been missing.

There were some wines, too. Gigante’s Friulano Vigneto Storico 2010 was the biggest take on this varietal that I’ve ever encountered, as fat and rich as a City banker. 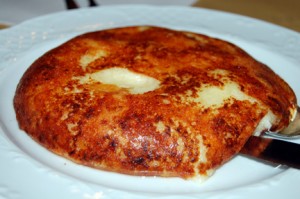 Frico – Montasio cheese heated with other ingredients (potatoes, for instance) until it melts together and becomes crusty. Photo by Jeremy Parzen.

A 2006 Pignolo from Ermacora was compromised by excrescent use of oak. Friulano winemakers often try too hard to impress with their red wines, piling wood on top of otherwise impeccable fruit like icing on a cake.

The dinner ended with a magnificent La Sclusa Picolit 2008. Just 2,000 bottles were made of this sugary masterpiece, as smooth as a river stone and with a triumphant finish.