The builders still have plenty to do at Hugo Warner’s new Market Café in Hackney’s Broadway Market. Outside, the road at the south end of the market was being levelled – to make it easier for the yummy mummies to push their prams over the bridge, I suppose. 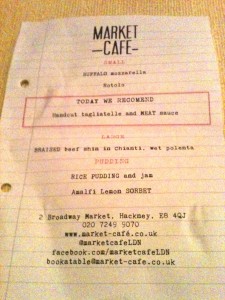 It’s not always wise to have “soft” openings of restaurants and hotels. I much prefer the smell of food to wet paint. Nonetheless, Hugo, who co-founded the Benugo restaurant business with his brother Ben in 1998, had a “sneak preview hard hat” evening at Market Café.

He sold Benugo in 2010 and, as a Hackney resident, has chosen to open something here. His inspiration was the classic Formica, Italian-owned “greasy spoon” cafes. Market Café has the Formica-look but the food is far superior to anything found in a typical greasy spoon.

The starter of buffalo mozzarella was very simple and very tasty. But it’s the sort of thing I can make at home and don’t feel the urge to spend £7 on when I eat out. 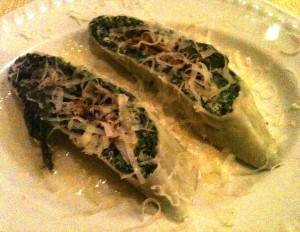 The rotolo – pasta stuffed with mushroom, spinach and ricotta – was yummy. This and the starter were drunk with a 2010 Veneto Pinot Grigio by Bacaro – all good clean fun.

Also yummy was a brackish tagliatelle in meat sauce (pork sausage, I think it was).

The braised beef shin was very tasty but a bit dry – it needed more braising! It came with wet polenta, which has a softer consistency to fried polenta. I hadn’t tried it before but I liked it.

Hugo told us that he was looking to buy the butcher next door and use its meats to supply the restaurant. Perhaps another empire is being built.

The two meat dishes were eaten with a docile Angelo Montepulciano d’Abruzzo 2009. The wine list is mainly Italian. It’s nice to see Silvio Jermann’s Pinot Bianco and Schiopetto’s Sauvignon Blanc from my old stomping ground in Friuli. And this is a charming way of justifying list prices: “A MESSAGAE (sic) OF LOVE, PEACE, TRANQUILITY & VAT IS INCLUDED”. 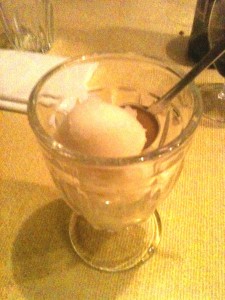 Dessert was an intensely sweet lemon sorbet. Very nice it was too.

Market Café will be open for breakfast – think of all those ‘Ackney yummy mummies coming in for a post-school run coffee and gossip – but will close on Mondays. Drinking is allowed up to midnight on Fridays and Saturdays, though they have a 2am drink licence that goes up to 3am on Saturdays. I’m glad I don’t live in Broadway Market.

It’s unfair to judge a restaurant that is still being renovated. Nonetheless, Market Café’s food is for the most part very good, though sometimes pricey. The dining room and bar are both noisy because of all that wood and Formica – and the looped music was grindingly repetitive. I can’t face listening to Steve Wonder again – but I don’t mind more of that rotolo.