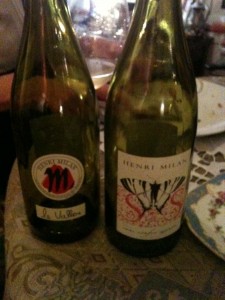 I had dinner with some Georgian friends in deepest South London last week. As always, we tried a few wines.

My little treat for Mako and Eko was Admiral’s Reserve 1421 Cabernet Sauvignon 2009 from high altitude vineyards in western China. I thought it was fleshy, not wearing too much oak make-up, and adequately ripe. I did think there was some reduction, though. It’s not as accomplished as the 1421 Chardonnay that I also tasted recently but it’s still a fine effort.

Eko produced a couple of wines from Henri Milan that I had not had before. 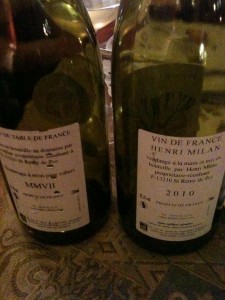 First, the Sans Soufre Ajouté (blanc) 2010, the very sight of which made me shudder… Amber for danger! It was very oxidative and cidery at first. Hmmm. But with Mako’s salad and a roast chicken it was delicious, as smooth as a river stone and with fluent acidity. A beguiling wine.

Milan’s Le Vallon MMVII does have sulphur added, apparently, but was not choked by it. It was red-blooded and Porty, suggesting ripeness but not extraction. I liked it but it was more buffed than the white. Sometimes less is more, non?

You see? I do like natural wines – but only the good ones!