Despite being Worcestershire born and bred, I was completely unaware that fruit wines were being made only ten minutes from my parents’ house.

During the summer I visited Alan Jackson, who has been producing fruit wines at his Callow Hill farm for 25 years. He doesn’t advertise, which might explain why I’d never come across his wines before. More likely I was spending too much time in my bedroom studying for A-Levels.

Alan comes from a long line of Worcestershire / Warwickshire farmers with a tradition of cidermaking and winemaking. He began to commercialise his wines at Chippenham Folk Festival some years ago. Nowadays he trawls the festival circuit to sell his wares: the Reading Beer Festival is his best client. Additionally he sells through local farm shops.

Callow Hill Country Wines produces 3,000 gallons a year of 18 red, white, rosé, fortified and “mulling” wines. All the fruit is sourced locally, with some frozen and kept back in case of a fallow year. For example, there were no damsons three or four years ago – they were killed by frost. 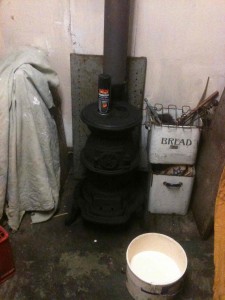 The wines are made in 50-gallon plastic drums and “fermented on the pulp”, skins and all. After filtration they’re bottled. It costs 50 pence a bottle, Alan told me, and 12 pence per cork, the latter sourced from Rankin Brothers & Sons in Thame. There have been no TCA problems but seepage has occurred occasionally.

With a friend I tried Callow Hill’s 2009 Elderberry Medium Dry on Boxing Day. The combination of lusty fruit, airy tannins (elderberry is added to the damson to soften its rude texture), tub-thumping alcohol and fluent acidity made this seem something like an ambitious New World Wine. At any rate, it was a little bit of home medium dry home in South London.