On 5 December I was invited to taste Ukrainian wines at the newly opened Alyn Williams restaurant at The Westbury. Never having tasted any Ukrainian table wines before, and having seen no more of Ukraine than Kiev airport, I was interested to see what these wines would be like.

This was apparently the first-ever tasting of Ukrainian wines in Britain. Exports to the UK are virtually non-existent. Indeed, the 2009 edition of Hugh Johnson’s Wine Companion makes no mention whatsoever of Ukrainian wine.

Ukraine has some viticultural assets in its favour – principally that it shares the same latitude as Bordeaux. Bessarabia, home to the Kolonist Winery, borders Moldova and was once part of the Roman Empire, when grapes and olives were cultivated here. Kolonist is named after the Bulgarian “colonisation” of the area in the nineteenth century. 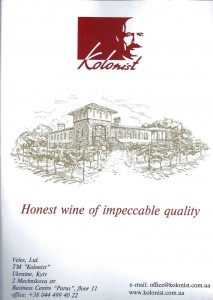 van Plachkov, former governor of Odessa oblast (administrative region) and CEO of an energy company, established Kolonist in his home village of Krynychne with his late wife Svitlana in 2005. The estate overlooks Lake Yalpukh, about 150 miles southwest of Odessa. Only 20 hectares of vines are currently in production, though ten more will be planted in due course. The rest of the grapes for the 130,000 or so bottles made annually are sourced from local growers. Ten different varieties are made and bottled.

The charming Bordeaux-based consultants Olivier Dauga and Cathy Socasau, whose clients include Château Caronne Sainte Gemme, were recruited by Kolonist in 2007. They are making their influence felt in a particularly French way by encouraging the use of Bordeaux clones for Cabernet and Merlot vines and of French oak for élevage.

Pouring the sample bottles took a bit of thinking about because the labels were so impenetrable – they are of course all written in Cyrillic. I trust that these will be changed for export!

The Aligoté 2009 had cheesy flavours and was short. The vines are 37 years old. Quite how a relatively obscure Burgundian variety found its way to the Crimea boggles the mind.

The tongue-twisting Sukholymanske 2009, a Ukrainian variety created from a crossing of Chardonnay and Plavay, was a bit raisiny and volatile.

The slightly nutty Riesling 2009 was softer and less sugary than the Riesling 2011, though the latter was clean and lemony. Kolonist’s Riesling is the real thing – they use a clone of “Rhenish”, or “Rhine”, Riesling.

The tar aromas of the Merlot 2010 suggested extraction. There was some brett here too – and not in the best sense either. The 2009 was much better, with more suppleness and less oak make-up, though both vintages had spent nine months in expensive French oak. The Italian Merlot clone is being replanted with Bordeaux clones.

Cabernet Merlot 2009 was also nicely textured, though retaining a rustic edge. It must have been a good vintage. The 2008 was greener; the 2010’s fruit was sweeter.

The monovarietal Cabernet 2009 was as bright as Piccadilly Circus. It had similar flavours and texture to the Cabernet Merlot but showed better length and concentration. Riesling Demi-Sec 2009 was sugary, fresh and pleasant. At any rate, it was much better than the unripe 2010.

It was a mixed bunch, then. Some of the wines are very acceptable; others need more work to make them palatable to export markets. Kolonist Wines are imported into the UK by Premier Packaging & Design International Ltd and sold at extraordinarily high prices – most of the reds are £35.02! Only oligarchs can afford that.

Bottles from the 150-year old Trebetskoy Winery were also presented. Its owner Alexei Diakov, who has regenerated the estate since 2005, was unable to join us due to “visa problems”. 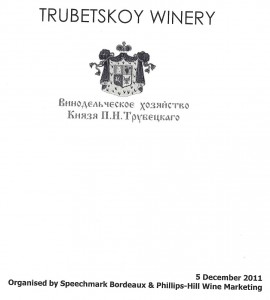 Trebetskoy’s Aligoté 2011 had just been bottled. The spicy nose was a nice contrast to the softer palate, though the finish was rather sickly.

The volatility of the Chardonnay 2011 was made even more painful by eye-watering acidity. I have not smelled sulphur as potent as that hovering over the Riesling Dry 2011 since I visited Rotorua in 2004. Such a pity: the wine itself seemed fine, with a glimmer of fire behind the smoke.

The Riesling Medium Sweet 2011 was much better and cleaner. Then came the Merlot 2010, which was woefully unripe, as was the Prince Trubetskoy 2010 Cabernet Merlot. The 2009 (that vintage again) was far superior – sweet and juicy.

The chewy, rustic tannins of the Cabernet 2010 were ok but the flavours were unappealing. The Cabernet “Old Vines” 2009 was denser and smoother but still pretty basic.

As for the restaurant, this is Alyn Williams’ solo debut since leaving his position as Head Chef at “Marcus Wareing at The Berkley”. The food was excellent: simple but high quality recipes (mushroom risotto, pine sorbet, slow cooked rib of Devon red beef, coconut parfait) made with good quality ingredients and served in sensible quantities. However, the chairs – or my chair, at any rate – were very uncomfortable, with the backs far too steep and making me slouch, which does me no good at all.

The company of the good-humoured Ukrainian Ambassador, His Excellency Mr Volodymyr Khandogiy, who was in the news the day after the tasting, and his wife Natalia more than made up for the uncomfortable chairs, though.