On Wednesday 23 June my friend Stefano Milani invited me to taste four wines and four cheeses at a Selezione Zanotto “Wine Cheese & Jazz” evening at The Star of Bethnal Green – not somewhere I visit very often, admittedly, and certainly not for wine tastings. I took my passport just in case.

We began with Zanotto’s Col Fondo, a de facto Prosecco though not labeled as such. I first tasted this in March when I wrote, “The Zanotto had the characteristic softness and frothiness of Prosecco but was much fuller and longer and more vinous – a proper wine.” It didn’t seem as cloudy this time but it retained a mineral edge. 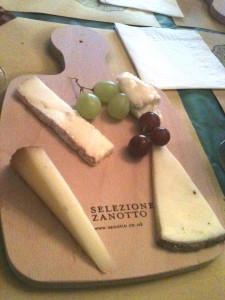 It was paired with a very decadent Sottocenere al tartufo from La Cave à Fromage in South Kensington. This cow’s milk cheese flavoured with truffles matched the wine’s earthiness but was perhaps a bit too rich for it.

I’ve never had an exciting Trebbiano d’Abruzzo but Cirelli’s 2009 version was an outstanding example of this wine. It was almost too good for the nutty and sweet Abbaye de Belloc, the only French cheese in an otherwise Italian line-up – Zanotto’s man from La Cave insisted that he could find no Italian cheese that was suitable.

The pale-coloured ’A Vita Cirò 2008 was too tannic for the Taleggio. Pairing smooth northern Italy with rustic southern Italy rarely works well! Some people might consider the orange-hue of this wine to be a fault – the Gaglioppo grape is prone to oxidation.

The final pairing was another attempt at north / south harmony. Azienda Vinicola Carbone’s Aglianico del Vulture Stupor Mundi 2007 I found very challenging at first, with the “shoe polish” smell of a wine that is wearing too much oak makeup. But it improved greatly with aeration. Its plump, spicy fruit would be ideal with a bistecca or something else with lots of protein – but it was too big and burly with the Gorgonzola cheese.