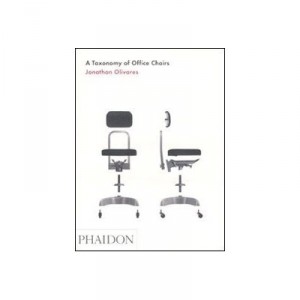 At first glance this is a very unpromising book. Who would have any interest in a catalogue – a taxonomy! – of something as mundane as office chairs? But, like many people, I spend a lot (too much, probably) of my life in an office chair. I guesstimate that I sit in my chair for 55 hours each week. It has a close relationship with my physical, and by extension mental, wellbeing.

Chairs are a metaphor for office politics – think of how executives in a company have big, comfy chairs while those lower down the food chain sit on hard, unfurnished chairs. As Jonathan Olivares writes, “Hierarchical organization had a long-lasting effect on chair design: from the early-twentieth century up until the 1990s, executives, managers, and secretaries typically sat in chairs that reflected their status” (p.17).

The choice of chairs for inclusion “has been underpinned by one rule: only chairs that have introduced at least one novel feature have been included”, it explains on the jacket. So, with 132 chairs catalogued here, that would mean 132 “novel features”. As Olivares points out, “Unlike plants and animals that evolve slowly over thousands of years, products are subject to frequent and spontaneous mutations at the hands of their designers” (p.11). However, “There is no single inventor of the office chair” (p.15). It is not unlike the development of the cricket bat – its origins largely unknown but with the fundamentals established very early on.

Researching the book was a challenge. Old catalogues are discarded; companies change ownership or go out of business; archives are not maintained; “industry veterans” are rare and far-flung; chairs are kept in museums with restricted access (p.11). And how do you find a photograph of the underside of a chair?

There are interesting details, such as Frank Lloyd Wright’s bespoke chairs for his various buildings. Sigmund Freud had a custom-built chair (p.32), which looks nice but, like a lot of the older chairs here, is probably uncomfortable.

My own office chair most closely resembles the “Sapper Chair” (p.48), though its armrests are different – and surely my chair cost a good deal less.

The book was funded by Knoll but the author has played it entirely straight – there is no obvious sycophancy towards Knoll.

Olivares is commendably earnest about his subject and has high aims for it: “As far as I am aware, this book is the first taxonomy of an industrialized object… I hope that A Taxonomy of Office Chairs serves as a model for scientific and objective analysis of design history” (pp.9-13).

A Taxonomy of Office Chairs is a fine achievement.