Today (8 June) I went to the Sri Lankan High Commission in Hyde Park Gardens for – I couldn’t believe my luck when I was invited – a lunch reception with the Sri Lanka cricket team, which is currently touring England.

I spent Sunday, Monday and Tuesday afternoons at Lord’s watching the Second Test between England and Sri Lanka. By the end of Monday I was confident that England could win. In the end, it was a draw. This is a good England team and one that has publicly stated its ambition to be the No.1 side in world cricket. But you don’t become No.1 by being so cautious, fearing defeat more than craving victory.

The Sri Lankan team was very impressive and professional, posing for endless photos with young (and not so young) ladies. Their courtesy and professionalism was a rather stark contrast to the surly behaviour of Ian Bell and Paul Collingwood at a sponsor’s wine event at The Oval that I attended a few years ago. England cricketers are not known for their enthusiasm for schmoozing.

There was a splendid lunch for us dignitaries, with many dishes to choose from. I might have tried them all but they were so piquant that I couldn’t take any more spice, even with a rinse of Lion Beer.

Egg hoppers are I suppose a Sri Lankan version of an omelette, with an egg broken into a pancake. 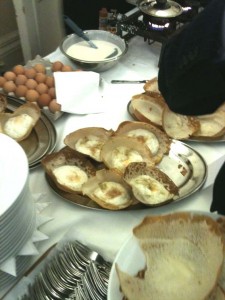 The Vegetable Kothu Roti, a bread made with egg, vegetables (or meat) and spices, was helpfully labelled “shredded pan cake” (sic). 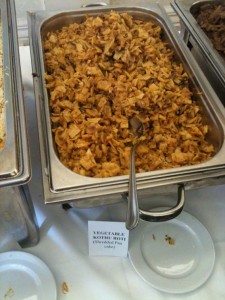 Lamb smore was a meat stew with spices and coconut and much else. 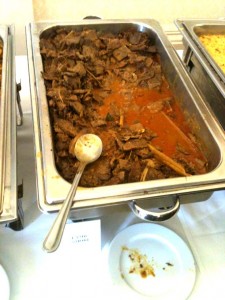 The appropriately named Devilled prawns and Devilled potatoes were spiced with chilli. 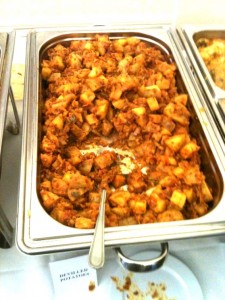 Caramel pudding is a very typical Sri Lankan pudding I was told, as was the coconut crème caramel (Watalappam). 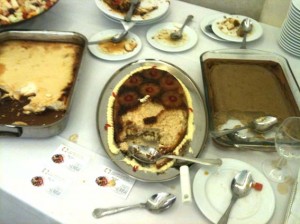 With food like that, it’s no wonder that Sri Lankan cricketers have such imposing physiques. 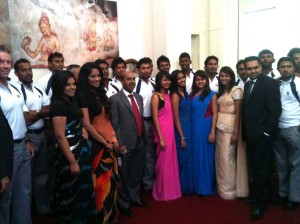