Recently I was invited to Cecconi’s – “the best breakfast in London”, a wine merchant assured me – to have dinner (not breakfast) with Giuseppe Negro of the Piedmont winery Azienda Agricola Angelo Negro. Marta Sobrino of Wellcom PR in Alba accompanied us.

Giovanni Dominico Negro established the Perdaudin estate in 1670. It now has 60 hectares of organic vineyards spread across the Roero hills, planted mainly with Arneis, Barbera and Nebbiolo. Giuseppe told me that his grandfather made the first “dry” Arneis in 1971: according to Burton Anderson’s Wine Atlas of Italy, Arneis was historically used to “soften” Nebbiolo or to produce a sweet wine.

I had tasted Negro’s Barbera d’Alba Bric Bertu 2007 and Barbera d’Alba Nicolon 2007 at the Barbera Meeting held in Asti in March 2010. The Bertu was by far the better of the two. 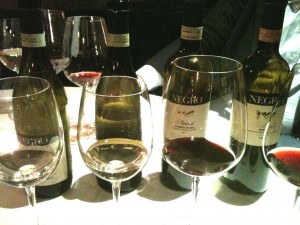 Typically, I was late (and apologetic) to arrive at the restaurant – and gasping for a drink. We started with Roero Arneis Serra Lupini 2010, all tank fermented and aged, with six months battonage. The fruit was quite plump – Arneis is a low acid variety, though 2010 was a “good year” for acidity, Giuseppe said – and there was a bit of phenolic texture on the finish. It was a good wine, as refreshing as a spring morning in Alba.

The Roero Arneis Perdaudin, also of the 2010 vintage, comes from a single vineyard that was planted in 1961. Although made in exactly the same was as the Serra Lupini it was noticeably richer and denser (albeit a bit less fresh) than the previous wine. Older vines and more limestone in the soil are the best explanations for this. Giuseppe reckoned it was good for 15 years.

Having checked my previous notes, the Barbera d’Alba Nicolon 2007 was more or less as it was in 2010, with whiplash acidity and wood-influenced flavours.

I much preferred the Roero Nebbiolo Sudisfà 2006, which had authentic Nebbiolo colour, smell and structure. There was a bit of oak apparent on the nose – 24 months in French oak, using 1/3 new barrels, then a year in bottle – but it didn’t scar the fine fruit. Sudisfà is local dialect for “satisfaction”. I almost felt like Mick Jagger.

The food at Cecconi’s is well-made, relatively simple food that uses high quality ingredients – Italian food epitomised, really. But the prices are very much Mayfair style.

I started with a very tasty dish of gnocchi with tomato & smoked ricotta (£12). For the main course I ate ossobuco with mash potato (£26). The pastries that were put on our table meant that there was no need for dessert.

The three of us had a nightcap in Ain’t Nothin’ But…, the blues bar in Kingly Street. I had been meaning to pay a visit since my friend Brendan Kelly recommended it to me. Now I felt like Keith Richards.