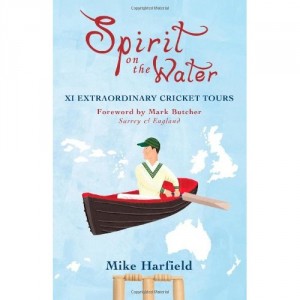 In his introduction to Spirit on the Water, the former Surrey and England batsman Mark Butcher writes, “few things are harder in sport than winning on tour.” Conditions are “alien – heat, insects, harder pitches, different balls, dodgy umpires” (p.9). But for the “harder pitches”, it sounds just like Pakistan.

Anyway, the eleven tours described by Mike Harfield include three Ash Tree CC tours among the famous (and sometimes notorious) international tours, spanning 1868 to 2010. Some of the choices are surprising. For example, the 1928/29 England tour of Australia gets in ahead of Bodyline in 1932/33, which is a surprising omission – though admittedly that story has been told ad nauseam.

The description of how England “scraped home by two wickets” against the West Indies at Lord’s in 2000 brings back happy memories – I was there!

Apropos of the Barmy Army, Harfield says, “We go to a Test match mainly to watch cricket” (p.111). Well said, sir! I don’t go to chant silly songs or get drunk, either. I also agree that “iPhones, if used in moderation, can be useful” (p.191).

I think that I would enjoy his company.