On 11 May I was invited to attend a “Food4Media MediaPlace” event – “A Taste of the Orient” – at Pacific Oriental on Threadneedle Street, right in the heart of The City and completely surrounded by our friends in the banking industry.

No. 52 Threadneedle Street was built in 1840-43 as a mercantile clubhouse and Hall of Commerce. Subsequently used by the Bank of London, it was acquired by the Oriental Restaurant Group a few years ago and, after a year of renovations, reopened as Pacific Oriental in 2008. 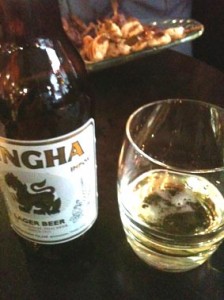 Two beers were available. The Thai-made Singha (£3.95) was flavourless, which was fine by me because it was a warm evening and I’d just had a brisk walk from Monument station. Asahi Super Dry from Japan (£3.80) was fuller, bitterer and – happily – less carbonated. I do wish that beer producers would put less (put no!) bubbles into their drinks. 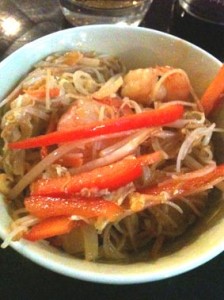 Some wines from Coe Vintners were also available to taste, though I’m unsure what these had to do with “Oriental” tastes… Anyway, Lourensford Chardonnay 2010 from South Africa was oaky (part barrel-fermented) and not much else.

Now owned by Louis Jadot, Domaine Ferret’s Pouilly-Fuissé 2008 was more lifted and lively than the Lourensford, with better integration of (second to fifth fill) oak. The 2004 is £12 a glass here.

Caliterra Tributo Pinot Noir 2008 was plump, showing dark rather than red fruits (and some oak). It was supple but perhaps needed a bit more acidity. Nonetheless, it’s good for c.£8 retail – and thoroughly iniquitous at £32 on the Oriental’s list.

The Tributo Carménère 2009 was a ripe style for this grape, with little of the greenness one normally finds. The fruit was supple, with some oak on the finish. Pleasant – but not worth £30 a bottle.

Lourensford Winemakers Selection Syrah 2007 was very South African – which is to say that it had that telltale “burnt robber” aroma.

A couple of wines from Brazil also made an appearance. I visited Vinícola Miolo when I went to Serra Gaúcha in October 2009 and tasted its Quinta do Seival Casta Portuguesas, which is actually from Campanha Gaúcha rather than Serra Gaúcha. I wrote then, “Turning to garnet at the rim. Supple texture and lively on the nose. Rustic and characterful. Drink now to 2012.” The bottle at Pacific Oriental (it was the 2005 vintage again) was very farmyard-smelling, earthy and smooth – nearly à point. One for the serious drinker – as long as you don’t tell them that the wine is from Brazil!

Miolo’s Merlot Terroir 2008 was, as I noted in 2009, “very Rolland” – Michel Rolland is a ubiquitous French winemaking consultant whose wines tend to show his hand.  Eighteen months ago I noted “Oak prevailing over the fruit at the moment, especially on the finish. Supple fruit and good length. Drink 2012–2015+?” Retasted, it showed ripe fruit and tannins, with some oak.