Recently I was invited by www.fruitwineshop.com to attend a tasting of fruit wines at The Bowler overlooking Wandsworth Common. 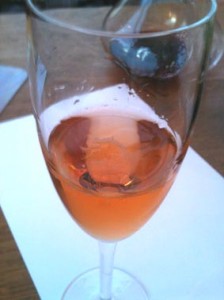 The Cairn O’Mohr Winery at Errol, between Perth and Dundee on the East Coast of Scotland, produces a strawberry sparkling wine, made, like all the wines here, from a single but unspecified vintage. According to their website, “What we do is gather up strawberries, raspberries, brambles, elderberries, elderflowers, oak leaves even, from all around, prepare them in different ways with water, sugar and various other ingredients to make a kind of sweet fruity soup, then we introduce our resident grape yeast into the barrels. Overnight these clever little organisms come to life and set to work converting the sugars in the mix to alcohol, breathing off carbon dioxide in the process which makes it go all frothy. After three days the must (what you call it) is hand pressed and when all the sugar has been turned to alcohol, the yeasts slip in to repose and gradually fall to the bottom of the tank. The clearing wine is drawn off from the top, filtered, bottled and stored in the dark.”

A bit different to grape wine production, then, but the basic process of converting sugar into alcohol with yeast is the same.

The sparkling strawberry wine’s lovely orange colour is how I imagine a sunset over the Firth of Tay would look on a summer’s evening. The surprisingly fine mousse was induced by carbonation rather than fermentation. It tasted as clean as the water in Loch Freuchie, with puckish acidity to balance the distinctly off-dry (67g/ltr and labelled as “medium sweet”) sugar level. It was very charming, though the sweetness might become a bit cloying after a while. “We are selling a lot at the moment for weddings, which seem to be coming back into fashion”, Judith Gillies, one of the fruit wine makers at Cairn O’Mohr, told me in an email. 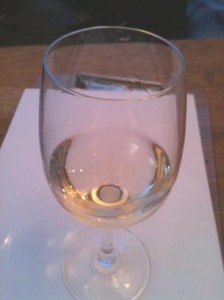 The Elderflower wine was Sancerre in excelsis! The pure elderflower aromas would remind many people of Sauvignon from the easternmost part of the Loire Valley’s viticultural areas. It was not as acidic as Sancerre, though, and was again distinctly sweet (26g/ltr) – “sweetened up with our own elderflower cordial”, said Judith, who suggested drinking it “with cheese, as well as being very nice served chilled in a hammock.”

Cairn O’Mohr’s Elderberry wine is an esoteric “Rich Portish (sic) Red”. It smelled like an obscure Iberian wine, the sort of thing that I can never spot in blind tastings (not that I spot much). There was some sweetness (44g/ltr) and brisk acidity that masked the tannins, which came from, as Judith described it, “fermenting fresh elderberries on the pulp before pressing and fermenting-on.” Elderberry has more tannin than grapes, apparently. 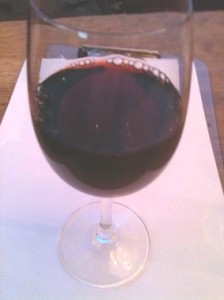 Carr Taylor produces still, sparkling and fruit wines near Hastings. Their prune wine is marketed as “The English alternative to Sherry.” The oxidative Sherry style is “classic prune flavour and retained during fermentation by cool conditions,” David Carr-Taylor explained to me. No Sherry butts or soleras here.

It tasted of Turkish Delight, dried fruit and rose petals – everything but prunes, in fact. Like the Cairn O’Mohr wines, there was a spoonful of sugar – “some 38 grams per litre”, according to David.

All the wines had a stalky, fresh green character to them, which some wine (fruit wine!) critics would blame on underripeness but I find it appealing.

So how do you sell British fruit wines? Images of homemade winemaking in bathtubs or a bucket in the garage taint them. The British are self-deprecating about their food and drink to the point of being embarrassed by it. But these well-made drinks are nothing to be ashamed of. And if a sweetish fruit drink made from apples called Magners can be a success, why not these fruit wines?