On Monday 21 March I was invited to taste some wines and have lunch at the still-officially-unopened St. Pancras Renaissance London Hotel. It had a soft opening last week and will be officially opened on 5 May. 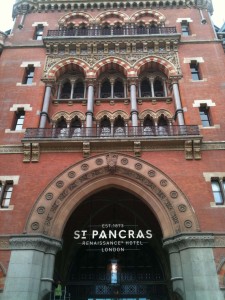 Originally called the Midland Grand Hotel, this vast Gothic structure was opened on 5 May 1873 (hence the 2011 opening date). From the mid-1930s to the 1990s, the building that Sir John Betjeman called “too beautiful and too romantic to survive” was effectively mothballed and left unloved and unwanted on Euston Road.

Over the last few years, London & Continental Railways and Manhattan Loft Corporation have pumped millions into restoring the hotel and its 5 floors , 211 rooms and 34 suites. Although much of the hotel is still a building site, its innate splendour is very apparent.

The hotel’s restaurant is, or will be, The Gilbert Scott, to be run under the auspices of Marcus Wareing. Doubtless he will be there for the opening and then never seen again anywhere near the kitchens. 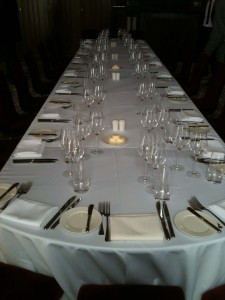 Our ad hoc restaurant was upstairs in what was the “Ladies’ Smoking Room”, apparently the first place in London where ladies could have a crafty puff. It’s a big room with high ceilings and faces south, overlooking Euston Road and the area around Judd Street.

We had a simple two-course seafood lunch with wines from the Austrian producer Laurenz V., who makes only Grüner Veltliner. They’re decent wines – correct and not too acidic – though the Grüner from the terrible 1980 vintage that Lenz showed us was a horror. It had a pitiful 10.5%  alcohol and 10 g/ltr of acidity – the other, younger wines probably had about 8 g/ltr. The 1980 had acidity that scraped like fingernails on a blackboard.

The first course of Cornish crab, pickled mouli, apple jelly and crushed avocado was a little bit spicy but no problem at all for the 2009 “Charming” Grüner Veltliner – just about an ideal match, actually. 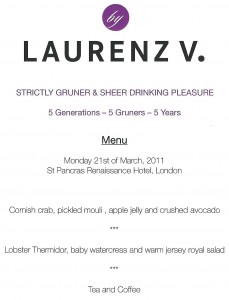 The lobster thermidor was superb. The warm jersey royals came in their own pan, which was a nice touch. Lenz likes to put his wines up against the competition so we had a few other bits and pieces including an obscure – so obscure that not even Stephen Brook, who knows everything, had heard of it –Tuscan white called Gagliole. Made from Procanico, Chardonnay and Malvasia and fermented in new oak, its plump fruit and sweetcorn flavours were prefect with the lobster. Such a rich dish needs an oaked wine to match all that cheese and egg and butter. Unoaked Grüner is better with shellfish.

The official opening is the day after my birthday so perhaps I will treat myself – or find somebody to treat me – to some more lobster.