The strapping bloke in the picture below is Marcus Trescothick, former England opener and now captain of Somerset. 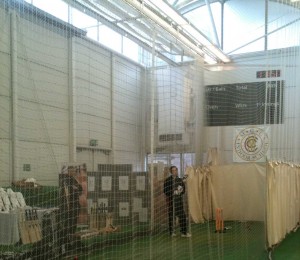 He was at Lord’s on Saturday 5 March to promote Mongoose bats at the Lord’s Retail Show. In particular he was demonstrating the weird looking thing he is using here, with a longer handle and shorter blade than is typical.

He told us that the top of a bat is not used much anyway, maybe only for defence against short-pitched deliveries.

The bowling machine was set at 75mph, which is medium-fast and barely likely to trouble a good batsman. But standing right next to Trescothick’s net I could see the ball zooming at what seemed an impossibly quick pace. I’m no cricketer, admittedly, but I would have been completely beaten by those deliveries.

Trescothick, though,  once “warmed up”, hit the ball all over the place. Even with the netting we were nervous about being hit by one of his drives. He’s a big, strong man and hits the ball extremely hard. 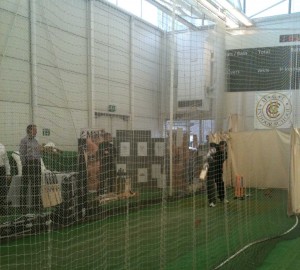