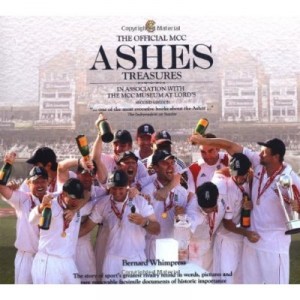 This splendid-looking slipcased volume is a visual (rather than literary) history of The Ashes, using reproductions of much previously unpublished memorabilia from the MCC’s archives. Most of its 62 pages feature an insert, or “enclosure”, which are expensive to produce. For example, the foldout panoramic 1925 photograph of the MCG on page 17 is five feet long. It’s surprising that the book costs only £30.

Ashes Treasures is mostly laid-out according to a basic template: title, standfirst, two columns, an image at the bottom left of the spread, an image at top right, and a text box on the right-hand page. Despite the pleasing images it looks formulaic, more like a magazine than a book.

The text is basic but contains some amusing stories. In Ashes cricket, some things don’t change. “(An) early tourist commented that he didn’t think much of the locals’ cricket but that they were ‘a fine lot of drinking men” (p. 6) sounds like the 2010-11 Ashes series rather than a pioneering nineteenth century tour Down Under.

Sometimes it is clumsily written. A caption on page 25 reads, “Blazer belonging to England bowler Alec Bedser, one of the few to trouble the 1948 Australians.” I don’t think that Bradman and his men were much troubled by a blazer.

There are some solecisms. Bill Frindall was not “an enduring presence in the Test Match Special team for the 246 home Tests from 1946 to 2008” (p.19) – he began in 1966. The grammar of the disclaimer is unacceptable and, in view of what is being said, ironic: “Carlton Books Limited apologises for any unintentional errors or omissions, which will be, corrected in future editions of this book” (p.62).

Nonetheless, this is a lovely book to look at. If only it could have included the 2010-11 Ashes…