On Saturday 12 February I had the pleasure of attending Acker Merrall & Condit’s “Burgundy Forever” auction in New York. The sale was held on Central Park South at Marea restaurant, which is “the hottest reservation in town” – Lady Gaga likes it a lot, apparently. 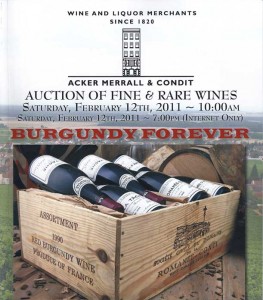 In contrast to the ascetic ennui of London wine auctions, which typically are held in a small backroom off Bond Street and are sparsely attended, auctions in New York (and Hong Kong) and held in restaurants, with an endless supply of good food and wine (often BYO). What wines you get depends on how much you spend. A high-roller friend of mine at the Acker auction got three different Montrachets to try – I didn’t get even one. But I didn’t do too badly.

My first wine of the day was Lanson 1982 (in magnum), which was my type of Champagne – clean, crisp and fresh, with softly mature fruit. It was still lively – no rush to drink this.

The intensity and minerality of the 1996 Billecart-Salmon Clos St-Hilaire was something of a shock to the system after the Lanson. I’ve had this wine once before and it was magnificent then. I’m not a big drinker of Champagne but the ’96 Clos St-Hilaire is possibly the greatest blanc de noirs currently available – a stunning wine. This will easily keep going to 2020 and beyond.

It was La Paulée weekend in NYC, hence the Burgundy-themed auction. My one and only taste of Pinot Noir on this trip was the Clos de Tart 2005 served at Marea – from a magnum, of course. It had a fairly deep colour for a Pinot (2005 is a ripe year) and an exotic nose of spices and dark fruits. The lush, velvety texture was as intoxicating as the wonderful weather outside – I challenge anyone not to walk across Central Park on a sunny February morning and not have a spring in their step.

A pleasant young man at my table had brought a bottle of Château de Beaucastel 2000 with him. At first smell I screamed, “Brett!” But it became better with aeration and had a lovely, elegant texture. I’d be happy to try this again in 2020.

Palmaz Vineyards in Napa was a new name to me. Another young man (they always seemed to be young men) at my table had a bottle of Palmaz Cabernet Sauvignon 2002 with him. It turned out to be a good example of elegant Napa Cabernet, with sweet fruit but not at all extracted or heavy. It costs $120 direct from the winery. The aforementioned young man was a very typical neophyte auction-goer: He was cutting his teeth on Napa Cabs before moving onto the more serious stuff from Bordeaux and Burgundy.

My final wine of the six and a half hour auction was Ridge Montebello 1985. It was far too meaty for me, smelling of barbecued meat and soy sauce. The fleshy texture was appealing (though the tannins verged on hardness) but for me it was just too darn meaty beaty big and bouncy. It was good to see this wine, though – it’s not as if I taste old vintages of Ridge very often.