On Tuesday 18 January I was invited to 28°-50° (sic), my friend Xavier Rousset’s recently opened City restaurant, where the new releases of Jacob’s Creek Regional Reserves were presented to me and other wine bloggers.

I have happy memories of drinking Jacob’s Creek Reserve Wines a few years ago when they were selling at £7-8, about £2-3 more than the basic wines. They were noticeably better than the non-Reserve stuff and well worth the extra money.

We were hosted by Bernard Hickin, whom I’ve met once before, at a tasting of older Coonawarra wines in May 2010. Bernard has been at Jacob’s Creek (aka Orlando) since 1976 and has recently been promoted to Chief Winemaker. He doesn’t foresee any significant changes to the wines under his watch but said that they will “evolve to meet the needs of consumers.”

As usual, I was late to arrive but still in time for an aperitif glass of 2005 Steingarten Riesling, perhaps Jacob’s Creek’s most distinguished wine. It had fresh, lemon fruit and acidity that cut like an arctic wind. I like Aussie Rieslings at this still-lively stage rather than the toastiness that comes with extended ageing. It could probably be kept until 2020 if you like senile flavours in your whites. 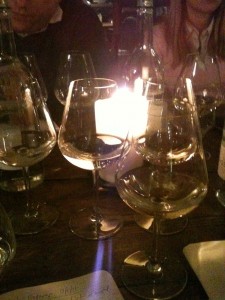 Only about 20% of the wine actually comes from the Steingarten vineyard these days, though production remains small at 3-5,000 cases per year. It’s a good wine. The 2005 was great with the fish (I think it was trout) and lentils starter, with the wine’s flavours perfectly matching the lemongrass seasoning of the food.

The 2010 Barossa Riesling Regional Reserve was totally different to the Steingarten – floral rather than mineral and less bellicose in its acidity. It felt much tauter. I wouldn’t mind seeing this again in five years time, when it might have loosened up a bit.

Bernard’s 2010 Adelaide Hills Sauvignon Blanc aspires to a riper style, as the passion fruit smells suggested. It had plump fruit and clean, if not bracing, acidity. But anything would taste slack coming after those blistering Rieslings.

Barrel fermentation has imprinted some subtle oak flavours onto the 2009 Adelaide Hills Chardonnay. It tasted quite fat because of the malolactic – maybe it would have been better to leave it as it was. It’s already a bit nutty, suggesting that it’s not long for this world. I wouldn’t want to be drinking this much past the end of the year.

Not hearing what was said about the wines being poured because of a boisterous diner downstairs – perhaps he was a City Boy spending his hard-earned bonus – I smelled the 2009 Adelaide Hills Pinot Noir and assumed it was the Coonawarra Cabernet. The minty, eucalyptus flavours were appealing but this is not what a Pinot should smell of. A reasonable wine but a poor Pinot. It’s on promotion at my local supermarket at the moment. I’m glad that I haven’t bought a bottle.

I didn’t mistake the 2008 Coonawarra Cabernet Sauvignon for anything else. It was a good example of what Coonawarra smells and tastes like, with fleshy tannins and eucalyptus flavours. It’s good for at least another five years.

The 2007 Barossa Shiraz was absolutely sui generis, balancing leathery, dark chocolate smells with freshness and pugnacious tannins. This was really good with the posh steak and chips (onglet of beef with chips and sauce choron, actually) that we had for the main course.

We also had some older red wines: a leafy, cedary 2004 St Hugo Coonawarra Cabernet Sauvignon; the bright and fleshy 2005 Johann Shiraz Cabernet; and the 2001 Johann, which has won nearly 30 gongs in wine competitions. It was darker and more brooding than the 2005 but a second bottle was apparently better and brighter.

But for the Pinot Noir caricature the Regional Reserve wines scarcely put a foot wrong. (I should have thrown it at the noisy City Boy). At £8 they’d be fine. At £9.99 they’re a bit too expensive. But Aussie winemakers deserve some sympathy for being hammered on export markets – and in the UK by increased duty and VAT rates – because of the strength of the A$. As painful as it is, we all need to get used to spending more money on wine – and especially on Australian wine.